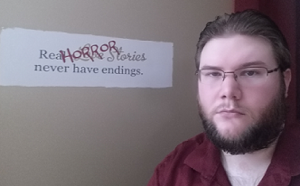 Robert J. S. T. McCartney is an author and the founder of A.B.Normal Publishing and Media Group.
He draws his inspiration from his nightmares and dreams, as well as the many forms of music. He says that his inspiration can be born from anything and he is always writing down ideas, or making up outlines of stories.
He quotes his favorite authors as H.P. Lovecraft, Isaac Asimov, Edgar A. Poe, J. R. R. Tolkien—to list a few of the many. He loves horror, science fiction, fantasy, and comedy. He is a big fan of Simon Peg, and Nick Frost.
He never used to like writing in high school, and always disliked English class. His sentiments started to change his senior year, where he did research papers on the absurdity that politicians and groups labeled video games as the root cause of violence.
Writing began to become his passion after, he and his family were in a near fatal car accident in 2008. Now he likes to write—unhinged—and continues to do so at his Knoxville, TN home with his wife, two daughters, and two cats.
When he is not actively writing stories he likes to play video games on both PC and console. His most popular played game being World of Warcraft, which is responsible for him meeting his wife of nine years.

The Chronicles of Bob: The Chronic Suicidal (Dark Humor) 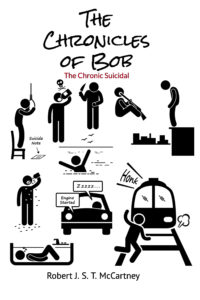 Hey, folks. My name is Bob Barnem, and I’m a chronic suicidal.

Do you ever get that itch? And I’m not talking about something that can be treated with a cream or powder.

You don’t follow? All right, say you’re driving down the highway. Have you ever just had a sudden urge to jump out of the car? Or maybe play intimately with traffic? In short, have you ever felt a desire for the thrill of suicide without the consequence of death?

This is a tale about my various ways of suicide…and encountering a bizarre knife, some phantom creatures, and being a hero—sometimes.

Things are about to get really exciting for both of us.

Some itches just need to be scratched. 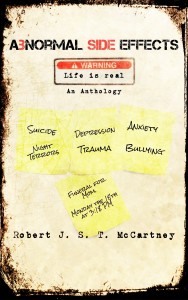 Suicide, depression, anxiety, bullying, PTSD (Post Traumatic Stress Disorder) and more. These are all the abnormal side effects of life. We have warning labels on just about anything nowadays. Almost…but life.

“Abnormal Side Effects” is an anthology written by Robert J. S. T. McCartney. Society prefers to drown out many of these as a lesser matter of concern. Instead, they push the lives of celebrities in our faces, promote unhealthy habits, demoralize and desensitize us. Some people encourage others that are in need of help and are suicidal, that “they should just kill themselves,” and more absurdities.

Many of the following stories take into account depression, family issues, trauma, bullying, and other subjects that go on every day in our lives. While these matters may be taboo to people on the street, society typically turns a blind eye, and even goes so far as to further shame and shun those that break from the definition of what we regard as normal.

Each tale offers a unique vision to the reader. You will explore just an inkling of the many side effects one experiences in life. Something that so many people do, on a daily basis. Through the highs and the lows; some tellings may be more disturbing than others, but rest assured, this is just a clinical study. There are no consequences of your actions here.

Now…it’s time to take a dose of reality.

The Lodestone Files: The Things in the Shadows, Book Two of the Among Us: Contact, Assimilation, Control, Extermination Series (Urban Science-Fiction) 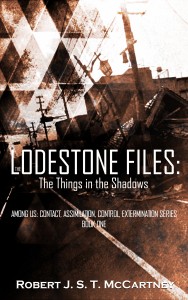 Idris Sinclair lives a rather typical life; helping his family run their cherished diner. However, all the normalness he knows in life is about to go straight out the window when he happens to break into an abandoned van in the restaurant’s parking lot. He discovers a small weapon’s stockpile and various files, involving affairs foreign to him.

As night begins to set in, the family is involved in one of our government’s most heinous and dastardly secrets involving entities, not of this world.

It walks among us. It could be anyone—or anything. Suspect everyone you know, or you pass on the street. There is nowhere where you are safe. Run all you want; it will only make you taste more delicious to it.

It’s too late. It already knows where you are.

The Lodestone Files: The Cat, The Mouse, and The Thing From Another World, Book Two of the Among Us: Contact, Assimilation, Control, Extermination Series (Urban Science-Fiction) 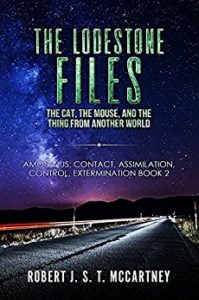 What would you do?

Life had been rather normal up until that miserable night. Idris and Cal are on the run from the government, and an alien. After witnessing their small town, Lodestone, get wiped out, and the loss of their family, the boys need to keep moving with no time to grieve. With the help of a strange drunkard named Mac, they may just live.

Hot on their trail is the secret government agent, Murdoch, who is tasked with making sure that are no survivors or evidence could otherwise jeopardize the very confidential agreement between two worlds.

Elsewhere, the alien that has taken on the form of James has begun to carry out his plans for Earth and humankind’s extinction. Earth, as it seems, is due for overwhelming destruction with no hope for humanity’s survival in this elaborate game of cat and mouse.

So, what would you do? 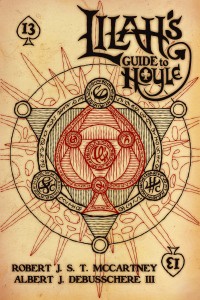 “All life is a gamble . . . We go to sleep every night comfortably betting that the next day we’ll wake up.”

Demons. Sorcery. Magical playing cards. It’s anything but a fairy tale. Armed with her choice deck, her beloved book, “Hoyle’s Guide to Poker and Parlor Tricks”, and the skill that led her to throw away her college fund, Lilah gambles with her life—and with the lives of those around her.

Elsewhere, other players have a different idea of the rules of the game. And investigating the bizarre chain of events is Middleton PD’s finest, Detectives Dana Deupree and Walter Conway.

It’s anyone’s game. The cards have been shuffled and the stakes are high. The call has gone around the table. Others may fold, but not Lilah.

She plays for keeps.