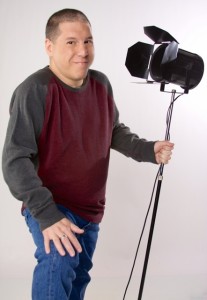 Russ Colchamiro is the author of the rollicking space adventure CROSSLINE, the hilarious scifi backpacking comedy FINDERS KEEPERS, and the outrageous sequel, GENIUS DE MILO, all with Crazy 8 Press. Russ lives in West Orange, NJ, with his wife, two children, and crazy dog, Simon, who may, in fact, be an alien himself. As a matter of full disclosure, readers should not be surprised if Russ spontaneously teleports in a blast of white light followed by screaming fluorescent color and the feeling of being sucked through a tornado. It’s just how he gets around — windier than the bus, for sure, but much quicker. 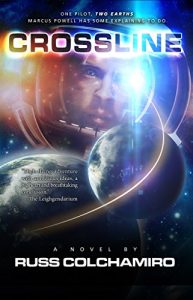 But during the flight something goes incredibly wrong, forcing Powell into a parallel universe. And soon after he lands on that strangely altered Earth, Powell finds himself at the center of a civil war he may have been destined for all along!

Meanwhile, back home, reclusive oil tycoon and Taurus CEO Buddy Rheams Jr. — who sent Powell on that very mission — has a mysterious past and a secret agenda, one that could prevent Powell from ever making it back alive.

From author Russ Colchamiro, CROSSLINE is the exciting tale of two ambitious men — and two mirror worlds — linked across time and space in a way neither of them could ever have imagined.

Because once you’ve crossed the line, can you ever really go back?

* Note – contains some strong language and intense situations. Not for young readers. 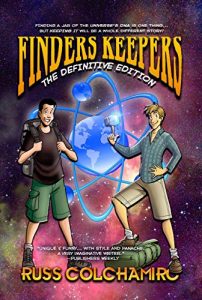 In the spirit of The Good Place, Bill & Ted’s Excellent Adventure, and The Hitchhiker’s Guide to the Galaxy, author Russ Colchamiro has gone back to the future to deliver his wildest, funniest novel yet–the updated Sci-Fi/Fantasy tale Finders Keepers: The Definitive Edition.

When a jar containing the Universe’s DNA falls from Eternity, bumbling backpackers Jason and Theo find their loyalties–and sanity!–put to the test. Unaware that a motley crew from another realm is chasing them across the globe to retrieve that radioactive vessel, these intrepid new friends are forced to contend with passion, responsibility, and their own mortality–and the fate of the Solar System, which hangs in the balance.

Traversing Europe, New Zealand, and the backbone of Eternity, Finders Keepers: The Definitive Edition ultimately asks one simple question: Is the life you’re living the life you actually want . . . or does the Universe have more to offer than you can possibly imagine? 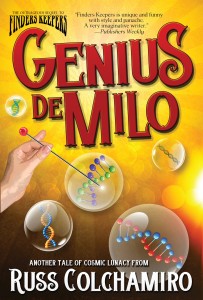 Best pals Jason Medley and Theo Barnes barely survived a backpacking trip through Europe and New Zealand that — thanks to a jar of Cosmic Building Material they found — almost wiped out the galaxy.

But just as they embrace a future without any more cosmic lunacy: The Earth has started fluxing in and out of Existence; Theo’s twin girls are teleporting; and Jason can’t tell which version of his life is real. All because of Milo, the Universe’s ultimate gremlin. Joined by the mysterious Jamie — a down-and-out hotel clerk from Eternity — Jason and Theo reunite on a frantic, cross-country chase across America, praying they can retrieve that radioactive jar, circumvent Milo, and save the Earth from irrevocable disaster.

In author Russ Colchamiro’s uproarious sequel to FINDERS KEEPERS, he finally confirms what we’ve long suspected … that there’s just no de Milo quite like a GENIUS DE MILO. 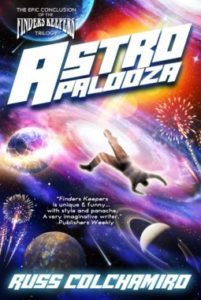 In the epic conclusion of this outrageous sci-fi comedy series … Astropalooza, the greatest celebration in the Universe, is just days away. And it’ll be a party like no other—namely, the last one ever! Because thanks to our bumbling backpacking heroes Jason Medley and Theo Barnes, the next Big Bang is imminent, with two massive energy waves barreling through space towards one another. When they collide, it’ll be the end of Existence as we know it. Can Jason and Theo finally prevent those waves from crashing, wiping away the Cosmos? Can they save the Universe … again? It’s the final countdown. And you’re invited!