A-Z guide: How both my books reached #1 on Amazon by Nicholas Rossis 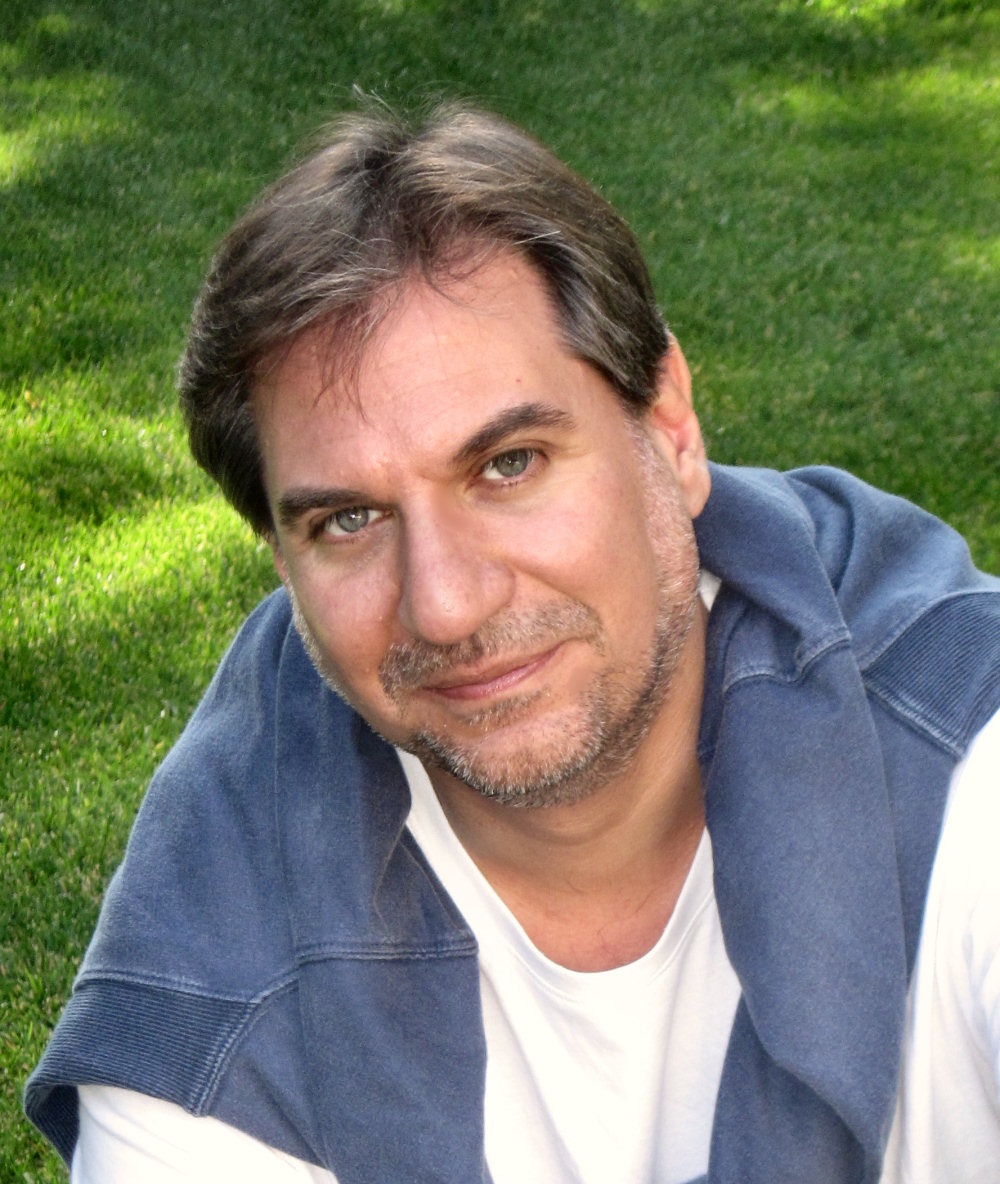 A-Z guide: How both my books reached #1 on Amazon

I’ve been reading contradictory opinions about book marketing and what does and doesn’t work, so I thought I’d share my personal experience on the matter, warts and all. 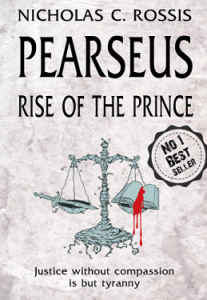 I am the author of the sci-fi series Pearseus, and published simultaneously the first two books on Amazon KDP.  I went exclusive with Amazon because I had a non-existent fan base (what people call Author Platform, which is really the websites, blogs etc. that mention you), so I figured I had to start by introducing my books to the public.  KDP allows you to reach an insane number of readers, and handing free copies for five days seemed like a small price to pay.

My reasoning, you see, was that a first-time author would have a hard time reaching readers at a time when 1,500 books are published daily on Amazon alone.  I figured I’d follow a five-step plan:

Ideally, number 5 would have come at the beginning, perhaps a year in advance.  However, I was too absorbed with writing to work on that.

So, on October 17th I published the books.  Shortly afterwards, I started my Twitter account.  I had a better base on Facebook, with some 300 Likes, and experimented on building a Tumblr blog.  This has now (d)evolved into a place for me to see photos and quotes I like, with just a dozen followers, whereas the Twitter account has mushroomed to almost 1,000 followers.

Following an early start of some 20 sales, mostly friends and relatives, things crawled to a halt.  Then, I started my free days.  Believing my second book to be stronger, I decided to promote that.  I focused on weekends for my free days, and used the Self Publisher’s Showcase and the Author Marketing Club’s Free Kindle book submission tool to advertise it.  The Author Marketing Club (AMC) page lists 24 sites that will list your free ebook, either for free or for a small fee.  I spent almost a day setting up my listing with half of these, and paid some $40 in total, then waited.

I had some 270 downloads on a Sunday, which means I had reached 270 readers I had no chance of reaching otherwise.  So, from my point of view, it was very successful, however it failed to translate into sales: I sold maybe a dozen books during the rest of the month. 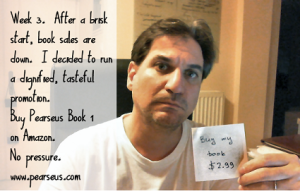 I tried tweeting about the book and using Facebook.  At some point, Facebook informed me a particularly dignified and tasteful promotional post had been seen by almost 1,000 people – which translated into absolutely zero actual sales.

In early December, it was time for my second giveaway.  Once again, I used the Self Publisher’s Showcase and the AMC tool, this time publishing on the second half of the list.  I had also written a couple of guest blogs pieces, the most successful of which concerned my thoughts on self-publishing vs. traditional publishing and the funny story of how my dad learned I had become an author.

The number of downloads was almost exactly the same, meaning I had now reached a little over 500 readers.  However, the post-giveaway sales effect was once again limited and faded rapidly. 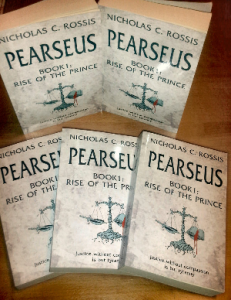 I was selling far more hard-copy books through Createspace, most of them because friends and relatives wanted to use my book as a novel Christmas gift (some 100 people were kind enough to do this).  Since they wanted autographed copies, I ended up ordering these books using my author’s discount, 5-10 at a time, and signing them, before selling them to my friends.  Money-wise, I wanted to cover my p&p costs, not make a profit, since my priority was – and still is – to establish a brand, not to make money at this stage.

Then, in late December (21-22) I had my third giveaway.  Again, I tweeted about it, this time sending direct tweets to some of the friends I had made, asking them to retweet (I felt embarrassed doing so, but I bit the bullet and groveled.  It paid off, as you’ll see).  I also used the Self Publisher’s Showcase and the entire AMC list, spending some $60 to ensure my listing.  I had also increased awareness of my book with some more interviews and book features.  Finally, I later realized that the giveaway had been picked by a kindly Reddit editor, which helped.

This time, the giveaway reached almost 4,000 people, astounding me.  Based on the strength of that, the book reached #1 in Metaphysical and Visionary and #73 in the entire Free Kindle Store (it helps picking less competitive categories for your book).  Within a brief, ecstatic moment, I had reached #504 in Author Rank for Science Fiction. 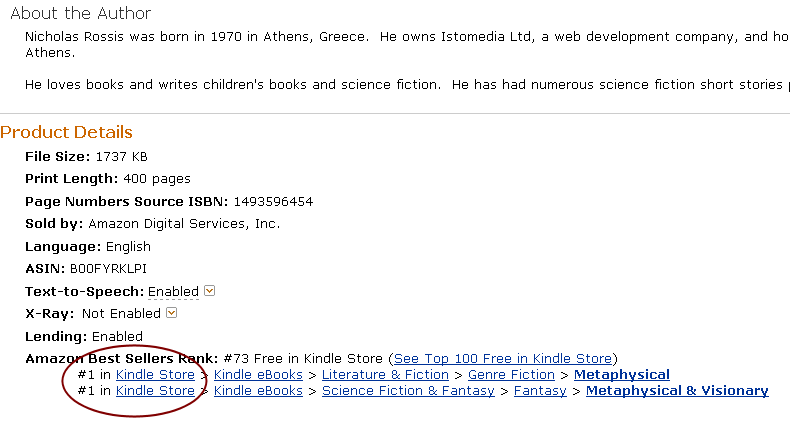 So what did all this mean for my sales?  It translated into some 40 sales of the other book, some 40 sales the next month with no advertising or promotion, and a couple of reviews.

I was still unsure as to why the sudden success, so in January I only promoted Year 18: The Schism, the first book in the series, using up all 5 free days simultaneously, as I realized the 3-month period had almost expired and I had run out of days.  People say the best days are Thursday, the weekend and Mondays, but in my experience it’s more like Thursday, Sunday and Monday.

This time, I advertised on the five sites that I felt had proven most successful.  These included the Self Publisher’s Showcase and SweetFreeBooks, among others.  I also mentioned it (to a much smaller degree) on Twitter and Facebook.  During the five-day giveaway, some 400 copies were downloaded, helping Year 18 reach #1 in Metaphysical.  This time, however, sales of the other book remained pretty steady, at a couple daily. 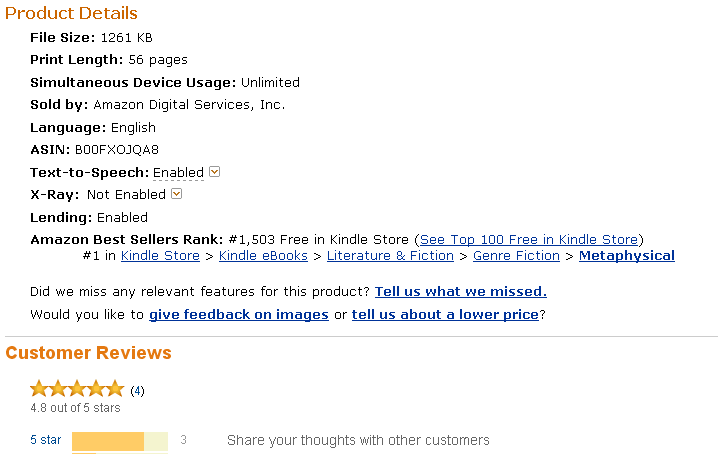 As you can tell, I’m still experimenting with my marketing.  It feels great to think that some 5,000 people have downloaded my book, although I’m aware that maybe 10% of these have actually read them, and very few reviewed them.

So, what ten conclusions have I drawn from my first 3 months of marketing efforts?

So, what plans do I have for the future?  This month, I focused primarily on giving away copies to my new friends on Twitter who kindly agree to review them afterwards.  I hope this generates more reviews (my books currently have some 16 reviews in total, almost half of them from friends).

My next step was to place a promotional banner on KBoards, for $40.  If that translates into enough sales, I’m planning to follow that with more banners, but always focused ones.  People swear by Ebook Bargains UK, Kindle Books and Tips and Bookbub.  The latter offer some very interesting statistics, although their prices are much steeper than others’. 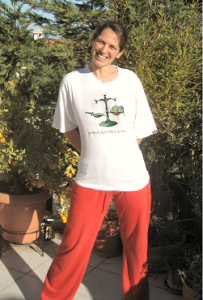 I’m also running an Indiegogo campaign, again with an emphasis on humor (if you like my post, feel free to contribute – perks include naming a character after you)!  I’d like to be able to print out a thousand hard copies, which would reduce the cost of each book from almost $10 (incl. p&p), to a little over $1.  This would allow me to organize book tours and events in bookstores.  I would also like to make a promo video.

Finally, I’m planning a giveaway in collaboration with SamanthaLaFantasie (available after January 31st); another great person I’ve met online and a great promoter of Indie authors.

Someday in the near future, I’d love to write a next post describing how well or poorly all that has played out and share my next experiences on book marketing.  None of this would have been possible without Paul Martin’s tireless assistance.  I’d also be amiss if I didn’t mention some other very helpful promoters like Bookgoodies, Koobug, Bookvibe, the Indieview, Tony Gilbert, ABCplus, Nokbok and last but by no means least, the wonderful Irene’s Book Oasis.

These are just some of the many great people who are helping out Indie publishers.  I apologize if I’m forgetting someone; since starting this weird journey, I’ve been astonished by the amazing, helpful people that comprise the Indie community.  It feels strange to realize that people who are nominally your competitors are rooting for you and doing everything in their power to help you succeed.

In a short three-month period, both my books have reached #1 on Amazon, and I have climbed one of the steepest learning curves I’ve encountered in my life.  It’s been a roller coaster experience, but I’ve loved every minute of it.  Along the way, I’ve met some great people, people who share the same passion as me, either as readers, reviewers, editors, proofreaders or authors, and this may well be the best part of this journey.  It is these and the many friends I’ve made on Twitter that prompted me into writing this post, in the hope of helping others who wish to publish and are worried about making it, and it is to them that my final words are addressed: Take the plunge, and I promise; there’s a lot of people waiting to help you.