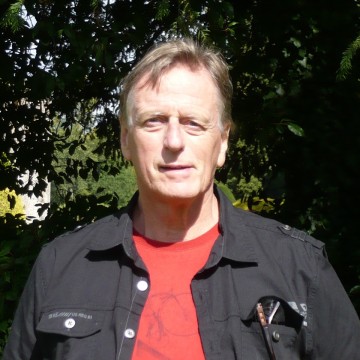 Self-Publisher’s Showcase: Today we are joined by Glyn Smith-Wild, author of the romantic mystery novel Sanctuary, and it’s follow up Repercussions .  Welcome to the Showcase Lounge, Glyn.  For any of our readers that haven’t come across any of your work previously, can you take a moment to tell us all a little about yourself?

GSW:  Not a lot to tell, really. I live in the county of Devon, a beautiful part of South West England, with my wife and son, not forgetting a rather neurotic Border Collie. Most of my working life has been spent in the world of finance, and latterly I had my own business which assisted small businesses with their financial affairs.

SPS:  Can you tell us about the moment you first decided you wanted to publish your work?

GSW: When I finally retired, I found myself with little to do, and slowly entered a period of deep depression, not helped by a car crash. A fellow dog-walker suggested that I try something artistic to fill my days. She, being an artist, thought I should start to paint. I knew, however, that I couldn’t draw a straight line, never mind create anything of beauty. Fortunately for me, my friend persevered, and suggested I might try writing. That was it. With some trepidation, I started to write. The stark blank page became my canvas in a matter of days. My lovely characters came alive and between  us ‘Sanctuary’ was born.

SPS:  Do you have any perfect writing conditions? Do you work for hours at a time, or more a little here, a little there?

GSW: I can’t write in the morning. That is when I use my time to edit, and more recently, concentrate on marketing. I write in the afternoon, and often into the evening if the words are flowing. I do try to write something, however little, every day and I always read the previous day’s work before starting anything new. I write in a small bedroom which faces out onto our garden and the countryside beyond. We have installed a desk in the corner which I find quite adequate. You don’t want to be too comfortable, do you?

SPS: What do you think led you to write in your chosen genres?

GSW: It wasn’t pre-ordained. I just started to write with no thought of genre. Then I presumed that it was going to become a romance. However, my characters had other ideas – they are very strong willed! – and the suspense started to take shape a little way into the book. 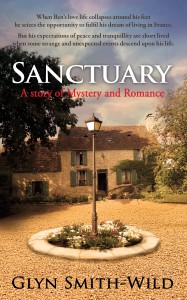 SPS: Your debut novel, Sanctuary, tells the story of Ben and Mary. Let’s start with Ben, if we may?  He is looking forward to celebrating their anniversary when he learns of Mary’s  unfaithfulness, presumably this is not something he saw coming?

GSW: Absolutely not. I guess he is not unusual, but he was certainly not aware of Mary’s dalliance with Donald. It was something he couldn’t conceive. He thought everything was perfect in their relationship.

SPS:  Do we get to understand what led Mary to embark on her affair with Donald?

GSW: Well, yes. But there is a more to it than meets the eye. It was not so much her idea, more that of Donald. He saw something in Mary that he thought would help him with his plans for the future. He was very powerful, and he hoodwinked Mary into a relationship.

SPS: Ben is understandably devastated; does running away to France do anything to help him?

GSW: He thought it would, and I suppose it did for a while until … No I’m not giving too much of the story line away here.

SPS: Tell us a little about Donald, he doesn’t seem the sort to just let Mary go back to Ben without a fight?

GSW: He doesn’t, but we’re venturing into ‘Repercussions’ here. That’s where he really starts to fight back.

SPS: With the introduction of Katie, was there the danger when writing, that things could become overly complicated?

GSW:  Not really. I brought Katie into the story to afford a little light heartedness to the story. She was the opposite of Ben and Mary. She lived for fun – and sex – most of the time.

SPS: Was the plan always to have a sequel or did you start with the idea of a standalone piece?

GSW: I didn’t have plans for a sequel, let alone a trilogy when I started out, but when I was approaching three hundred pages, I realised that the story would have to be split into more than one book.

SPS: Presumably with Repercussions hot on Sanctuary’s heels, there are a few things left unanswered?

GSW: There are a lot of things left unanswered, and some readers have castigated me for that. I tried to show that the story was continuing by showing the first chapter of ‘Repercussions’ at the end of ‘Sanctuary’. 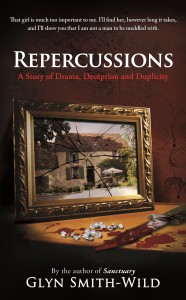 SPS: The second instalment continues Ben and Mary’s story. What can we expect this time around?

GSW: We learn a lot more about Donald’s past, and his determination to get Mary back by whatever means. This book is faster moving and has more suspense than the first one, with a car chase across France as a starting point. Donald is ruthless, and decides that if he can’t have her, then ….

SPS:  With the constant threat of danger, is the novel darker than its predecessor?

GSW:  Considerably darker, yes. But Katie is there to interject some humour again. In fact we do see some changes in relationship start to appear as well.

SPS: We obviously don’t want to encourage spoilers but can we hope for Ben to be happy?

GSW: There is a kind of happy ending to ‘Repercussions’ but the reader is once again fully aware that the story is far from over. The third part ‘The Reckoning’ is about to be launched on Kindle and only then are all the pieces put together, and I’m not telling the ending to that!!

SPS: Did you find the whole writing/editing/publishing process any easier second time around?

GSW:  Yes. I had learned many lessons. So much so that I have created my website to help new and aspiring writers. In it I show my own experiences and lots of tips and advice; things that I had to find out for myself.

SPS: What we can we expect next from the pen of Glyn Smith-Wild? More from Ben and Mary, or will you be trying your hand at something completely different?

GSW: As I say, ‘The Reckoning’ is about to be published, which, as far as I know at the moment will be the last of Ben, Mary et al. There is an idea going through my head, of a comedy, centred around a young boy who wants to be a detective, and his dysfunctional family.

GSW: Two things persuaded me. Firstly I am far from being a young man, and I could see that publishing in the traditional manner could take years. I didn’t have that luxury. Secondly, I relished the idea of much more control over the finished product. Internal  layout, cover design etc. would be down to me. I liked that idea.

GSW: The writing I have enjoyed immensely. The final part has been much harder to write because there were so many loose ends to be tied up. The chronology was a nightmare!  More of a nightmare, however, is the marketing. I don’t enjoy that at all, it’s just a necessary evil to me.

GSW: Only to take a look at my website http://www.glynsmithwild.com

GSW:  The most moving book that I have read recently is ‘Trafficked’ by Sophie Hayes. This is the true story of a young English girl who found herself being trafficked by a man who was once her boyfriend. It is a terrible story of physical, mental and psychological torture, but one that should be read. Sophie is now an ambassador for Stop The Traffic.

SPS: Thank you for joining us today Glyn, and good luck in the future.

GSW:  Thanks. I appreciate the opportunity to share my writing with your members.

SPS: For more information on Glyn and his work, please do visit his Author page here. Pick up your copies of Sanctuary and Repercussions today.