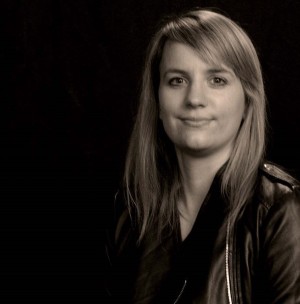 Self-Publisher’s Showcase: Today we are joined by Hayley Lawson: author of the upcoming War Kids– and creator of a Kickstarter campaign that launched today. Welcome to the Showcase, Hayley.

Hayley Lawson: Thank you for interviewing me.

HL: Writing is a new world to me; suffering from dyslexia from an early age I always shied away from writing, and found a love for drawing instead. I have been a designer for the past twelve years. I’m married with one beautiful 5 year old daughter and a dog.

HL: Normally I write in my living room when everyone has gone to bed. I write about 1000 words a day and I now take Mondays off to work on my writing. I also like writing on the way to a business trip on the plane, where I put my headphones on and all the ideas come flooding!

HL: Once I wrote ‘The End’, I knew I wanted my book to be published.

SPS: Why do you think it is that you have decided to work in the genre that you have, and do you see yourself ever writing in other genres?

HL: Deciding to write a young adult book was an easy decision; I was moved by the images of the lost generation in Syria I wanted to tell their story.

I am writing another young adult’s novel again this will be based on current events, an adult’s novel, and a children’s picture book with my daughter. I have eight books swimming around my head trying to get out. 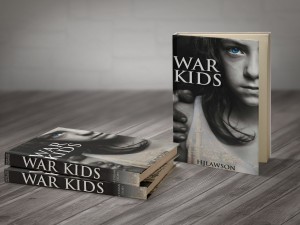 SPS: Can you tell our readers a little more about War Kids?

HL: War Kids is a novel about the Syrian Civil War through the eyes of children. It is based on current events in Syria with fictional characters.

SPS: How did you set about researching for the novel?

HL: I read newspaper articles, watched the news, researched on various news websites, watched YouTube clips from Syria, and listened to the houses of parliament in the UK when they discussed what to do after the chemical attack. I created a flip board to collect all the information.

SPS: Tell us about Jada, and where your inspiration for her came from?

HL: Jada’s character is based on an image of young girl after the chemical attack; she had just woken up after the attack and was in complete shock. I wanted to give her a power character, which was equal to the situation which she was in.

SPS: Jada travels across Syria with group of children, led by Zak. Has he gone through similar experiences to Jada?

HL: Unfortunately Zak has gone through similar experiences as Jada; it was heartbreaking researching for the book. There are too many awful experiences which the children have gone through, over the last three years of the civil war.

SPS: What would you like to achieve with this, your debut novel?

HL: I would like to create more awareness of what is happening in Syria. I feel that we all have a duty to stand up against war crimes, and not stand by watching them happen.

HL: My spelling & grammar has to be my worst skill, which is why I decided to create the Kickstarter campaign to help me fund professional editing costs.

HL: The rewards are the War Kids book in the following version; E-book, soft cover, hard cover. All books will be signed and numbered. There is also a cool reward of being able to name a character in my next book!  Rewards range from $10 to $200.

SPS: We do like to take a look at covers and the stories behind them. Can you tell us about how your cover for War Kids came about, and whose handiwork we are admiring?

HL: I designed and created the cover, one good thing about being a designer for the past 12 years. I wanted to have a strong image for Jada on the front cover, and an image of Syria. Her white top was a perfect place for the image of Syria.

SPS: What can we expect after War Kids from the pen/keyboard of Hayley Lawson?

HL: The next installment of War Kids is half written, this book is based in the USA about current events around the world.  I am planning to have this book completed by the end of the year. My daughter Callie, and I are also working on a book called Callies Dreams; it is a picture book, launching in June 2014.

HL: I attended the New York Writers Pitch conference in November 2013, and my manuscript was requested by Penguin and Sourcebook, I am waiting to hear back from them. Waiting four month’s is painful; I went down the traditional route querying over 40 agents.

One agent requested the full manuscript; I was over the moon with excitement, waited three more months.  Then I received the rejection email, but the funny thing was I wasn’t upset, more excited! In the three months it took for him to read the book, I had researched about every element of self-publishing and had been preparing to move forward with doing it on my own!

I like the idea of being a hybrid author; I will continue to query agents with my new books. And also prepare the books for self-publishing; I am not very good at standing still.

HL: Too be honest I have been overwhelmed at how helpful people are in the writing world; I feel they really want to help you, and ask for nothing in return.  I am really enjoying the new experiences. It is also fun having total control over my own product.

HL: When planning for my Kickstarter campaign I knew it was going to be important to inform people about my book, which is tricky when the book is not ready for reviews. I got in touch with Janine Fourie and Karen Swart from Sparkle Book Tours, to see if they would be willing to help me create a kickstarter book blog tour. Not only did they agree to the new concept, but they went above & beyond to help me. They were able to sign up bloggers for the month of my campaign, I will be forever grateful to them.

SPS: Thank you for joining us today, Hayley, and all the best for the future.

HL: Thank you the interview.

SPS: For more information on Hayley and her work, please do visit her Kickstarter page here.