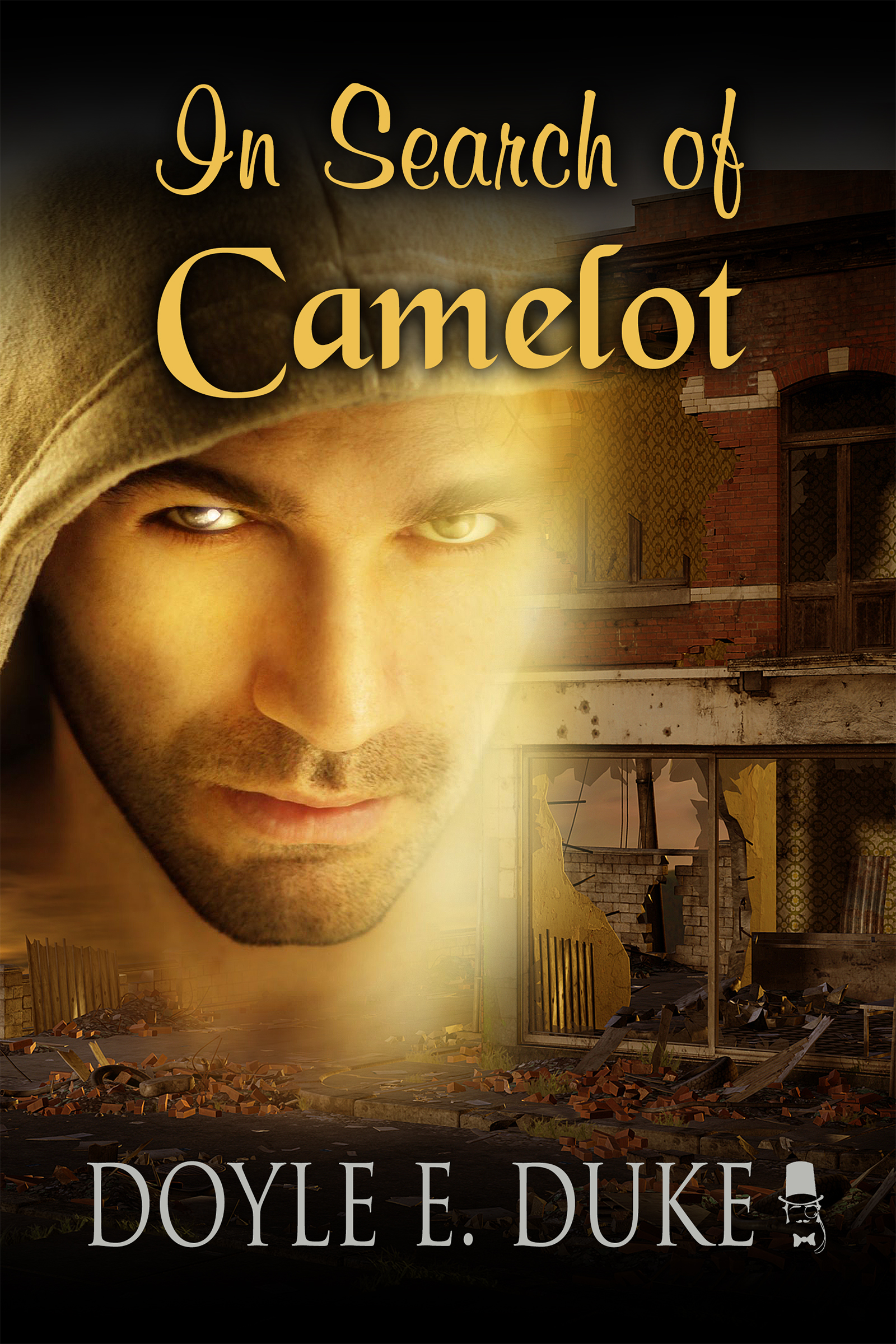 Self-Publisher’s Showcase: Today we are joined by Doyle Duke, author of the fantasy novel, IN SEARCH OF CAMELOT and the dramatic, literary fiction, EXTENDED VACATION. Welcome to the Showcase Lounge, Doyle.

Doyle Duke: Thanks for inviting me, Paul.

SPS: For any of our readers that haven’t come across you previously, can you take a moment to tell us all a little about yourself?

DD: I’m an ol’ Southern boy, though at age 73 I don’t suppose ‘boy’ is apt. Most of my life was spend in the South. I speak lazy English, like Alabama football, and appreciate good humour.  My formal education ended after one year of college, but I’ve never stopped learning. After an eight year stint in the US Navy as a photographer’s mate, I spent the next thirty-seven years working in photography in one capacity or another. I married at age 21; my wife of 52 years and I have a few acres in the country outside Huntsville, Alabama.

SPS: For a large portion of your life you have been a Photographer. What made you decide to start to write?

DD: My first book, THE AMAZING DECEPTION: A CRITICAL ANALYSIS OF CHRISTIANITY, was the result of my search for spiritual reality. I won’t go into detail here; all that information is available on my website at: www.doyleeduke.com/. Basically, I compiled the notes and studies of my twenty year search for understanding of the Bible into book form. After I finished that work I discovered I had other things I wanted to say. My other books, though in fiction form, deal with spiritual, environmental, or social issues; some subtly, others more blatantly.

SPS:  Is there anything from your experience as a photographer that has helped you in your writing?

DD: Most definitely, in the Navy I was a designated motion picture photographer. Much of that training involved script writing, point of view, settings and scene arrangements, and continuity. When I write I visualize and compose scenes and narration in my head. 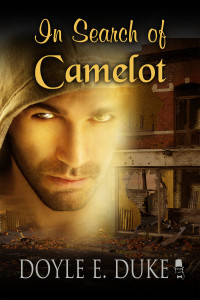 SPS: Your first piece of fantasy fiction is IN SEARCH OF CAMELOT. Can you tell us a little about the novel?

DD: IN SEARCH OF CAMELOT deals with social and environment issues that I believe will come to pass within the next fifty to one hundred years—overpopulation and food production, or financial instability. I know the general consensus is that such an event can’t happen, but in 1954, the earth’s population was three billion. Today, 2013, only 59 years later, it stands at 7 billion! It isn’t hard to imagine a population of 14 billion by 2070. You can also find more info regarding this subject on my website.

I wanted to add my voice to those who were already crying warnings. At first, I proposed to do internet articles, but quickly realized the information was already easily available. I then determined to do a fictional story in the hopes of bring attention to what I perceived to be a critical situation

The story is set in a futuristic United States approximately two hundred years after a worldwide financial melt-down. I have tried to envision what such a world might be like. The main character, Brad Sellers, leads the reader on an excursion through that world in search of a legendary city some call Camelot.

SPS : The main character, Brad, is a young man forced from an illiterate, controlling, religious community into the search for a fabled land. How does he cope with this development?

DD: To say much would be to reveal too much of the plot. Hopefully, CAMELOT is first and foremost, an entertaining story, but it involves the confronting and understanding of social issues. Brad is a naive young man who must mature rapidly, socially, mentally, and physically.

SPS : A lot of questions are asked about the fabled land. Can we expect all the answers this time around, or do you plan to revisit the land and characters in further works?

DD: A prequel, WHEN DREAMS END, is well underway and a sequel is perking in my mind. I should confess something. The recovery after the devastation, in CAMELOT, was written first because I’ve never been good at predicting the future—you know: what will life be like in 2069? So, I wrote CAMELOT because I felt I’d have more leeway for error. Let’s face it; if anyone is still reading CAMELOT in 2200 then I’ve done something right; if not, who is going to know?

Will all the questions be answered? Wouldn’t that end a series? Hopefully, CAMELOT will answer enough questions to inspire the reader to seek WHEN DREAMS END.

SPS: Why Camelot? Do you have a particular interest in tales of King Arthur?

DD: I work from an outline in my head; very loose, but with distinct scenes. Often a unique little twist will pop up. For instance; in the story Brad accompanies his friend Childs Ferris into the desert (don’t ask which one, we have to withhold some secrets), they are near death when discovered and Brad tries to tell his rescuers Childs is still in the desert. The word Childs is immediately assumed to be a child instead of a name. Just a play on a word, but I feel it adds a bit of realism.

I needed a reason to draw my searchers to the western U.S. It wasn’t hard to assume someone, in 2200, might still recall something about a mystical city called Camelot. 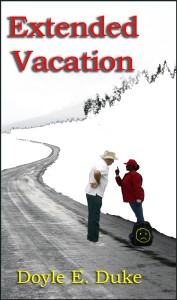 SPS: Moving on. Extended Vacation has been gathering some positive responses. That must be pleasing for you?

DD: Yes, I’m very excited about EXTENDED VACATION. I’ve posted a submission to a UK publishing site called: You Write ON, www.youwriteon.com/. Opening chapters are reviewed by others who make submissions. Your work receives a review for each review you write. Works are graded and the monthly, top ten submissions are review by an editor of a large publisher such as Random House or Orion. EXTENDED VACATION was number one on the first of November and has been within the top ten all month.

I recommend the site to all aspiring writers. Even if your work doesn’t make the top, the feedback from your fellow reviewers is tremendously helpful.

SPS: It is described as “a story of rage, bigotry, fear, suffering, perseverance, secrets, and a friendship that is tested to the limits” yet, at the same time, a Light Comedy. How have you managed to deal with these big issues in such a way?

DD: EXTENDED VACATION deals with the many adjustments blacks and whites in the south had to make after desegregation. Millions of people, especially southern, both black and white had to overcome old prejudices, hatred, ignorance, and just plain habits. It has taken years for that wall of separation to crumble. The rocks and pebbles are still there, but we have come a long way toward solving all those differences. EXTENDED VACATION is a novel of two of those millions; how they met and resolved their differences.

As for the comedy, I love humour. I see humour in life. I remember it from decades of experience. It is in life. That is the human spirit. Often, even in the worst of times, it will come to the fore. Even in funeral homes, during a wake; hang around long enough and someone will say something amusing. In my stories, I believe it adds interest and realism to the characters.

SPS: Tell us about Sam and Terri’s relationship. You certainly wouldn’t expect them to get on from first impressions.

SPS: The culmination of Sam’s journey is to be the ending of his life. Is there any hope?

DD: There is always hope; even in someone’s death. 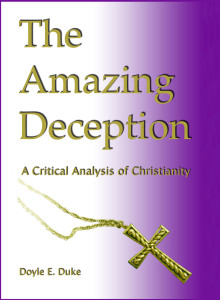 SPS: Of your other works, is there one in particular you would like to tell us about?

DD: AMAZING DECEPTION: A CRITICAL ANALYSIS OF CHRISTIANITY; was written as a history of Christianity. It didn’t begin as a book; it was a personal search for truth. I was a very dedicated Christian for about thirty years, but when conflicts and contradictions began to surface in my Bible studies, I was compelled to find the truth. My search led to a twenty year study of Christianity, Judaism, their history, and that of the Catholic Church. Most of what I’ve recorded stemmed from the research of others; how I used that information and some of the conclusions I reached are, I believe, unique.

SPS: Now would be a good time to ask if you can fill us in on what we can expect in the near future from the pen of Doyle Duke?

DD: As I’ve said, I’m working on a prequel to CAMELOT and thinking ahead to a sequel. I’ve thought of posting some personal learning experiences on my web site; experiences I’ve encountered in my efforts to become an accomplished writer. I have a number of things in mind that I wish someone had told me.

SPS: We like to spend a moment looking at an individual’s book covers. Can you tell us about how you set about coming up with a cover design?

DD: With the exception of IN SEARCH OF CAMELOT I did my own covers. Of course, the photographic part was easy and I know the basics of Photoshop. I commissioned a designer to do CAMELOT, www.digitaldonna.com/. I told her what I wanted, she set it up and it was terrible. She said, let me send you something, and I loved it. Since then, I’m not pleased with my other covers and will probably turn to Donna for print version covers—later.

DD: It was with THE AMAZING DECEPTION, ebooks weren’t IN in 2009. I was only publishing it for my kids and grandchildren with the hopes of making a few sales. I knew nothing about publishing.

I send query letters, synopsises, and chapters to thirty or forty agents with my first two novels. The more I learned, the more I realized the small chances I had of GETTING PUBLISHED. At 73 you don’t have time to go fishing with a safety pin.

DD: I have no experience or qualifications to advise someone desiring to enter the field as a profession, other than to say study the craft and seek formal training. For someone like me, with little training, who intends to just jump in, I say seek proper training if you can afford it. If not, join a local writer’s group, and read numerous self-help writers books such as Strunk’s THE ELEMENTS OF STYLE, Constance Hale’s SIN AND SYNTAX, and SELF-EDITING FOR FICTION WRITERS, by Renni Browne and Dave King.

DD: I have reviewed two books for Amazon that I enjoyed very much. I believe both authors are very talented: Robert Carter’s BARBARIANS, and Roger Penfound’s THE GUEST WHO STAYED.

SPS: Thank you for joining us today Doyle, and good luck in the future.

DD: It’s been my pleasure, and thanks again for having me.

SPS: For more information on Doyle Duke and his work, please do visit his Author page here.