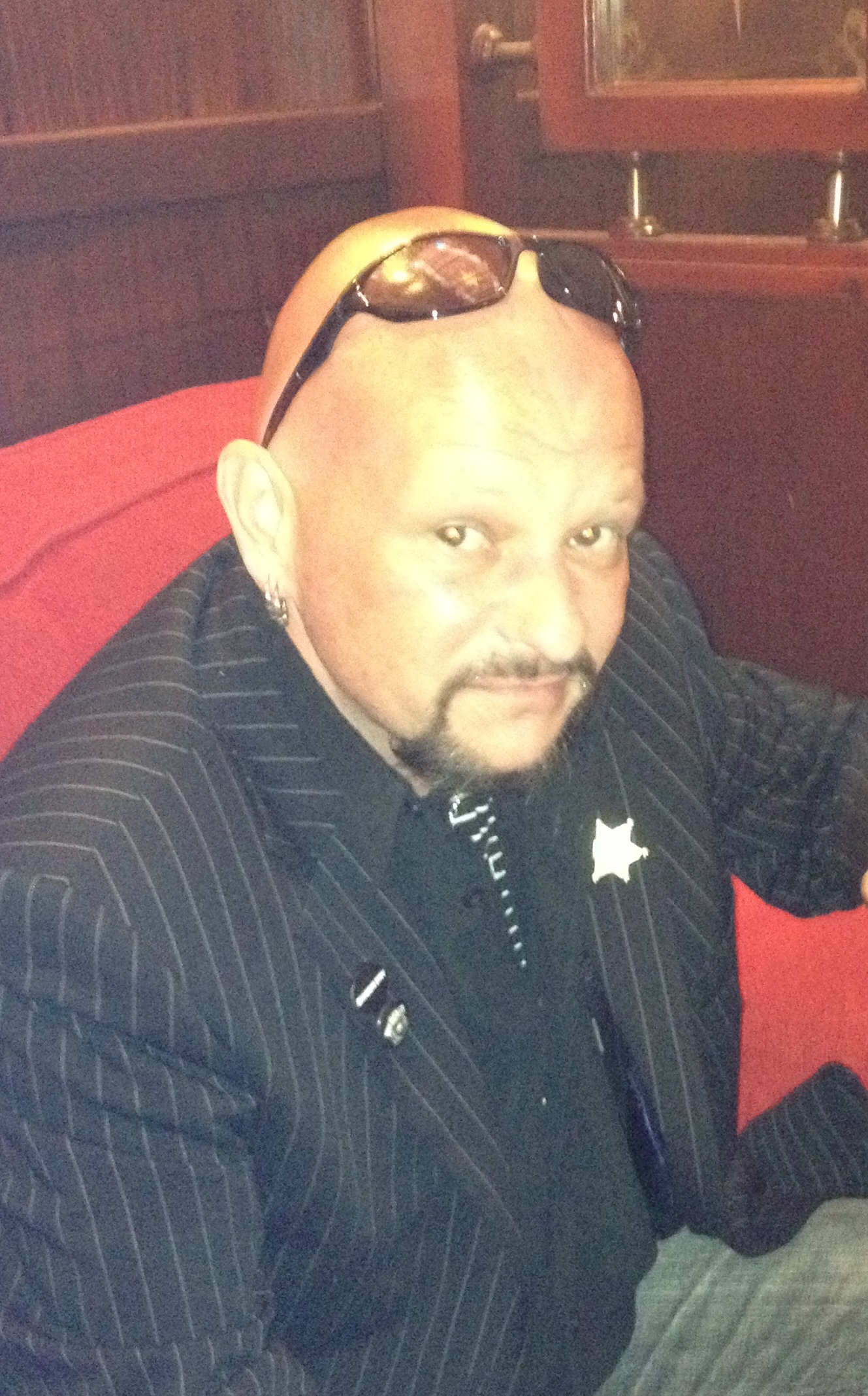 Kneel Downe: Great to be here.

SPS: Let’s cut straight to the chase. Why do use the style you do? Would it not be simpler to write a more traditional style of Sci-Fi?

KD: The thing is…the whole Blurb thing has been totally organic…it started with a one paragraph outline…I have no idea where it’s going…just this one final point to reach. It’s quite exhilarating to just let her go…

Myths and Legends captivate me. Man’s attempts to build sense out of pure random chance. I also love end of day scenarios…what happens when it all breaks down?

Hard Sci-Fi leaves me a little cold…I much prefer “Ideas” and concepts…here’s a Pigman…work out yourself how it’s possible. Words are so fluid and addictive…you can REALLY do anything with them…here’s a twisted broken Dream Cage…what is it? I don’t know, but what an image…let it play in your head a while and see what YOU think it is.

The way I write is very “Musical” so the idea of a musical was obvious and great fun.

For instance…when I see the city I hear Hawkwind…the Raven in the Dead Carnival is so obviously an Alice Cooper image that he was wrote in that way…offering guilty pleasures at a price…the world of the VEIL is fuelled by both Jethro Tull and mid period Toyah…all jungles and myths.

The Musical, BTW, is still on course. The recent Film nonsense has however taken centre stage…I have only ever written scripts for my re-imagining of Dr.Who back in 2000, purely for fun…so this last week has been a steep learning curve…I’m enjoying it and am quite pleased with the results.

SPS: Talk to us about this film ‘nonsense’, it’s not everyday a self-published author gets a film opportunity.

KD: Awhile ago I was followed on Twitter by various media companies. One of them was completely struck by the Blurb Universe and late last year contacted me about a screen version. I went to various meetings, I saw Lobo as a character! They had created a mock up of what they imagined he would look like and that was incredible. However…Like everything nowadays it’s down to money and they promised to get back to me when they had funding. I thought no more of it. Then at the beginning of July this year we met up again. The finance has been found to at least go into Pre-Production.

I am currently working on a draft script for another meeting in August and we will see what happens.

I can’t really give any more information ATM except for those who follow The Blurb…The Wolf Spliced Lobo is in it!

SPS: You seem to be influenced by both music and books, how does this effect how you write?

KD: My influences can be found yes in books. Jeff Noon. Michael Moorcocks fractured worlds with someone living over multiple realities. But I also dream, I listen to music. Song lyrics are a forgotten poetry. The concept album by Bowie – Future Legend speaks more to me than Phillip K Dick. Zodiac Mindwarp’s “wolf child” speech has more imagery in it than any sci-fi novel. Songs are pure imagery.
I remix bits all the time. Cut and paste ideas. Not like Jeff Noon does with his Cobralingus engine. Instead I take 20 minutes to distil the phrase, to change the tense, shape, colour of the words. Take words that sound good together then play with them till they make sense or paint pictures. A Noonian Sphere for example. Or a Dream Cage – what is a dream cage? It’s a cage for catching dreams. Everyone’s will look different but everyone know what it does. Words put together are so evocative. I have no time for filler, for excessive language. I can cram more into 140 characters than other authors do in three paragraphs. People who “get” the universe will “see” it with a minimum of extra help. You can tell a whole story in one tweet. The hard bit is if you have to stretch an idea out over multiple tweets to get it across. That is getting too close to conventional writing for me. Give me the imagery explosion of the single song lyric any day. Like Jethro Tull’s lyric in Thick as a Brick part 1 – “The poet and the painter casting shadows on the water” – you can see that whole thing right there.

SPS: Where do you start with the writing? You have built this incredible multi-layered universe, is it all the same process or does it differ?

KD: I wake up with a lot of dreams and ideas. If I wrote immediately on waking I would be much more prolific but it wouldn’t be good. I let the ideas sit ignored in the back of my head for a while, getting on with real-life things like housework and shopping. Then mid afternoon, once all the distractions are out of the way, I stand at the open kitchen window, watching the wildlife, with a beer and my phone and I start to write.
Amelia and the Blurb tweets are done on the spur of the moment. Amelia speaks to me…I just wait until I hear her voice in my head saying “right, I’m ready” and we go for it – five or 10 tweets at a time. I love the way Amelia plays with word structure, turning phrases around. That’s the way I hear the voice in my head, so that’s how it is written. I do have goals for the story – trigger points to get to but no fixed plan of how to get there. As a result it seems to grow bigger and bigger as Amelia wanders.
Lobo is slightly different. I wake up with the ideas and dreams and let them lie a while but Lobo’s story comes to me in such big chunks that it has to be noted down before it is tweeted out. There can sometimes be thirty tweets worth at once. Lobo is an alter ego for me. I have to really get into his character before I can write him. Listen to angry music and convince myself that I am him for half an hour until I feel him taking me over. He really takes a lot out of me – he is very hard work and spoils me for anything else for the rest of the day as I live in his character.

SPS: Do you read a lot of self-published work?

KD: I do read self-published work – both in books and on the internet, although I tend to not read blogs but that’s purely down to time constraints. I think self-publishing is the way forward for creativity. I love the fact that, on Twitter, you can come across a gem of creative twitter fiction in among the other nonsense in your feed if you follow the right people.

SPS: Any in particular that you’d like to recommend to our readers?

KD: Right now I would recommend James Knight and the Bad Poet. His creation, the Bird King, was probably my favourite character of 2012.
I also enjoy the work of Marc Nash and his twitter feed at 21stCScribe. His novel Time After Time was immense and refreshingly good, especially accompanied by the Spotify soundtrack that went along with it.
Ren Zelen is working on a follow up to the Hathor Diaries and I’m really looking forward to it.
Find the Tim and Death tweets from Ben Cooper very amusing and the highly creative poetry from Mandy Gibson who writes as welloverthought.

SPS: So, what are your immediate future plans?

KD: Well this year has got ridiculously busy. I am releasing three books in as many months. The first will be SPORADIC. This is a collection of all the non-universe stuff I’ve accumulated over time and never had room to put. It’s a nod to my Agent Steve who loves the non-Blurb as much as the Universe itself.
Then will be the follow up to VIRULENTBLURB:FRACTURES. REFLECTIONS will continue the journey started in FRACTURES and explain a lot of what’s going on. Lots of Joshua Knight related content.
Then will be AMELIA’S SONG. I’m surprised by the variety of people who have been reading the Amelia fable on Twitter. I have had good feedback from hardcore biker types as well as the more fanciful girly readers you would expect for this kind of fantasy tale.
All the covers are done, and we are in final edit. I couldn’t do this without the Blurb’s biggest supporters, Mandy Gibson who is my Editor and makes the nonsense readable, and my Artistic Partner Susan Omand who is an incredible artist and has really “got” what I’m doing. Her covers are fantastic works of art. And Steve, who hassles me to do interviews and talk about myself and my work, which I am never comfortable with, but I trust him and he trusts me. I am blessed with a creative and talented team.

SPS: What advice do you have for other writers starting out along the self-published route?

KD: There are two main pieces of advice. Firstly – write for yourself. Don’t try to fit into a genre or suit a market. Don’t try to second guess what the market wants or write things that you do not really feel or believe in because this deception will show through in your work. You will never be the next Beatles, so don’t try to be.
Secondly – don’t assume your audience is stupid. Too much description is unnecessary. Allow them to interpret your work how they want. Capture the essence of the thing rather than dwelling on the detail.

Surround yourself with people you trust. If they “get” you and trust you back, they will do anything for you. Support others in the same position as you. We are all in this game together and as a community the revolution will happen. Don’t be afraid to give copies to book bloggers, websites, or community chat rooms. Nothing works better than word of mouth.

Twitter is the most powerful social network out there. With Facebook you are talking to a limited audience of “friends” where as with Twitter anyone in the world can be touched by you.
Join community sites like selfpublishedshowcase.com, squidpublishing.co.uk and writearevolution.com. They are the bedrock of success. It’s liberating seeing the amount of interest grow in a project, taking it out of you hands and sailing away with it.

SPS: So, now we know a little more about how you tick, Where can we find your work, other than your page here of course?

The first book VIRULENTBLURB:FRACTURES is available as both paperback and eBook http://www.lulu.com/spotlight/KneelDowne
And I am available for comments and interviews (So I’ve been told) you can get me through Steve at office@dreamcagemediagroup.com