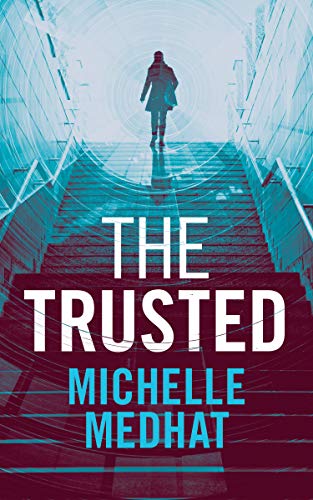 Michelle Medhat’s The Trusted is the first of five planned books in her Trusted series. The first book is an intriguing mix of espionage, politics, and nano-technology with some interdimensional travel thrown in for good measure.

The book’s main protagonists are Sam and Ellie Noor. Sam has been an agent of MI6 for the past ten years, but he has kept this fact secret from his wife of twenty-eight years. The book looks at the way their relationship is forced to evolve when this fact comes out at the same time as Ellie is starting to hear mysterious voices. In particular interest are also Sam’s relationships with various government agencies around the world and the varying levels of trust between the parties. You never seem to be too far from a double-cross…

The main antagonists of the work are a very cleverly created globally connected terrorist collective – Al Nadir -headed by Salim Al Douri (ex-CIA) and his second in charge, Sabena Sanantoni. Al Nadir are helped in their substantial grown through financially empowering the slum residents of the world to rise up and join together – a genius way to create an organization that leaves you contemplating just if something like this could ever actually come to fruition.

And as for the US President… well, I’ll leave you to decide whose side he’s actually on. His rise through the American political system though was one of my favorite parts of the story.

The story itself, it is fair to say, had me intrigued from the start – although it did take me a little while to warm to Ellie. The short, sharp chapters flick between Whitehall, Washington and Dubai in real time as the global terrorist threat of the Al Nadir collective threatens to spiral out of control. Best not mention Operation Snowdrop… There are also visits to another dimension as we meet Aswa-da, a Dark God from Kudamun. Thankfully, this adds in another layer to support the story, rather than taking over and distracting from it.

What pulled me in, over everything else though was the attention to detail of the technological aspects. I’m not so naive as to assume that stealth suits that render the wearer invisible – for want of a better example think Harry Potter’s Cloak of Invisibility – or nanorobots that can change a person’s face to any other of their choosing are in operation, but Medhat certainly made me want to believe it. The Nano-technology was enthralling, the possibilities endless. The inventiveness in creating a new breed of suicide bomber was very clever indeed. You feel a genuine threat from the collective’s actions and the obvious instability of its leaders.

There are a few aspects that detracted a little from the story for me. But not many. I was a little disappointed with the ease with which technological secrets were obtained from President Treehorne, and the two heads of a terrorist collective calling each other ‘babes’ – after both having had an upbringing in British private schools – fell a little short for me. The end also feels a little cut-off. A little too much left unanswered for my liking, but otherwise, I really enjoyed the start to this series and look forward to the next installment.