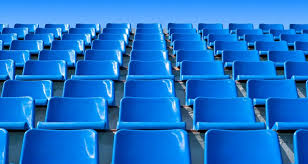 She was ready to give her speech.

The assembly stadium was filled with several thousand people, a carpet of constant motion atop the cultivated green. All the way to the highest tier of the stands, an empty seat couldn’t be found. Sound dampening projectors prevented the din from growing out of control, but at the hands of the skilled stadium-address operators, still allowed for a lively sense of social interaction and mounting anticipation. The operators eased up the control gradually, ramping up the decibels according to the schedule, building toward the Magnate’s arrival.

At the center of the open-air stadium, a point-of-view sphere was streaming a montage of the Magnate’s most iconic and memorable moments. The PoV was almost one hundred meters in diameter and it floated above a dais at the center of the stadium green. From anywhere in the stadium, a member of the audience could see the Magnate’s smiling face staring back, or sternly calling for action, or relaxing with her family in her modestly decorated home.

She emerged from a maintenance tunnel where the large machines that tended the green would normally enter the stadium. The Magnate’s entrance was three minutes and twenty-seven seconds early according to the clock on the PoV; right on schedule. The address operators sampled the crowd as a few caught sight of her, and wove their whispers into the broadcast. A single pair of clapping hands turned into a slow ripple, gained momentum and volume, and became a cheering mob of applause, standing and screaming. The PoV switched to a live feed, and Magnate Shepard was on.

She was average in all of her superficial aspects: she stood at one and three-quarters meters high, wore her dark brown hair to her shoulders, and had a solid and fit body. Her skin might have been arguably more golden than most, and her face more defined, but it was her composure that set her apart from the masses.

The crowd opened to her as she walked. She greeted and shook hands with many people as she went, and waved magnanimously to the crowd; the skilled operators made every wave feel personal, each smile directed.

Finally, the Magnate stepped up onto the projection dais at the center of the green. The sounds of the crowd were diminished. The audience relaxed and sat. The stadium belonged to her.

She began her address. An endearing and humble greeting. She continued. Lavish praise for the people, and heartfelt gratitude for their efforts. She paused appropriately for their applause. She directed their attention to their shared accomplishments during her term. The PoV displayed advances in medical research, technology, and improved education. She was building toward the main purpose of her speech. She was swelling with pride, but managed to appear endearingly humble.

“… and we have prospered.” Pause. “But there is more, more that we can have!”

The Magnate waited, looked at the crowd, listened carefully for their eager silence to reach its edge, “We have been striving for a better life since this world was settled over four hundred years ago! Since then we have unified our people under a single government! We have dreamed of a time when each and every individual on this planet would have not only what is needed, but what is wanted!”

The crowd in the stands rose up from their seats, and the audience on the green jumped and cheered. The swell of approval rose and fell as a single chest of breath the size of the stadium itself. When they calmed, the Magnate continued.

“The task has not been an easy one!” She changed her expression suddenly to one of comic knowing, and stated dryly, “We want an awful lot.” Laughter and chuckles, mixed cheers. “Not an easy task, no… but we have DONE it!”

While the crowd was lost in a cacophony of hysterical cheering, the PoV displayed inscrutable diagrams and schematics, and finally refocused on the Magnate, “Now, you can finally have everything you want, and you can have it… NOW!”

“Never wonder if you can have something… have it!”

“Never fight or struggle for anything ever again!”

The audience was whipped into an irrepressible and unanimous cheer. With that, Magnate Shepard closed her address. She waved and bowed and made her way out of the stadium through the mass of overjoyed people. They continued cheering long after her departure.

Back at her offices—her home—the Magnate was greeted and congratulated by several board members. Her personal assistant opened the door to her private chambers, “Powerful presentation, Magnate.”

“Thank you. Talking is the easy part. The difficult part was shouldered by all of the hard working people who toiled long and hard to make true comfort a reality.”

“Of course,” a slight bow of the head, and then almost as an afterthought, “Oh, uh, your daughter’s in the kitchen.” The assistant pointed inside.

“Thank you, that will be all for today.”

The door was closed behind her.

“Mom?” A teenager appeared in the hallway, “Mom!” They hugged. “Great job!”

“Thank you,” a sigh of relief, “I think it went pretty well.”

“Will it all really work? The way you said?”

“I can have anything I want!?”

The Magnate’s demeanor shifted suddenly, and became stern, “No.” She shook her head, “No, you can’t.” She held her daughter away stiffly with both arms, “Do you want to be just another one of them? A nameless one lost among the rest? Trained to enjoy simple, quick rewards?”

“No,” her shoulders sagged, but she held her mother’s gaze, “No, I didn’t mean that.”

The Magnate nodded her approval, “Imagine a world full of people who can have every comfort they desire for no effort, devoid of personal investment? They’ll be even more complacent than they are already,” peering deeply into her daughter’s eyes, “No my dear, this gift is for them.”

“But, what about what I want?”

The Magnate’s face was matter of fact, “Patience my darling. You will want something they have forgotten and can never have.” She beamed at her daughter, “Someday, you will take over the business, and you’ll be the one dictating and defining want for them. They’ll hand you the keys to their hearts and their futures. They’ll have everything you give them, and they’ll thank you for it, but they’ll never have control.”