Short Story – The Battle of Bledrag Field by T.O. Munro 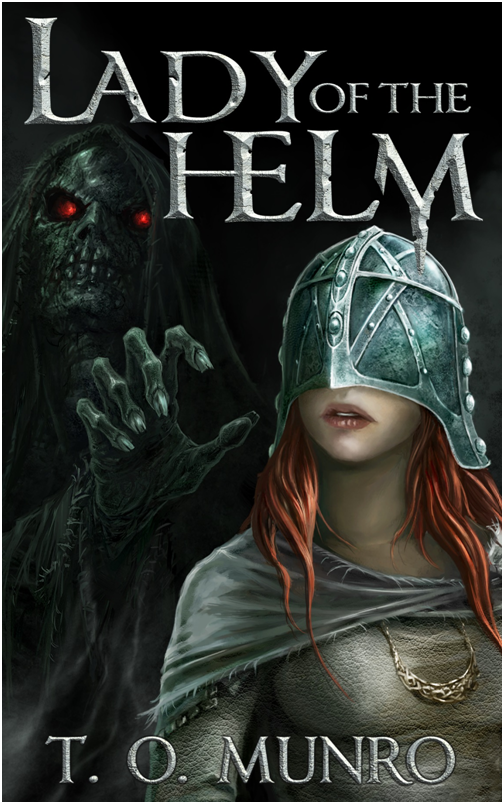 The Battle of Bledrag Field

“Hold fast men, set your spears,” the old general cried in a voice as deep as the thunder of the approaching horsemen.  He scanned the length of his battle line, thinned by a long bloody day from five ranks to little more than two.  He saw a wavering spear in the front line.  Its bloodied tip told of warm work already done, but the militiaman at its other end was trembling, unmanned at the theft of hope by this last great charge of the enemy.

“We’re lost, all lost,” the boy was whimpering.

“Come,” the general slapped a great hand on the fearful soldier’s shoulder.  “What’s your name lad?”

“Hargan, Hod Hargan, your Highness,” the boy replied struck between fear of the enemy and fear of his general.

“Well Hod Hargan, the harpers will sing of this day for years come, of how Hod Hargan and Prince Matteus stood side by side and repelled the invaders.”

Matteus exchanged a look with the guardsman at Hod’s side, one of the general’s own household guards sprinkled throughout the line to stiffen the resolve of the amateur soldiers.  They understood each other, the old general and the veteran man at arms, a glance and a nod and Matteus knew the guard would watch out for Hod Hargan.

There was no time for more exhortation, the nomad charge was nearly upon them.  With the dispassionate eye of a former cavalryman, Matteus had to admire the controlled power of the desert horsemen.  A wicked curved scimitar in each hand, the nomads galloped forward, mouths wide in a fearsome battle scream as they steered their steeds with the lightest touch of their knees.  These were men who knew their horses better than their wives.

“Aim low,” Matteus shouted.  “This is no time for chivalry.”

And then the storm of cavalry was upon them.  A culture built on speed and skill put no honour or value in armour.  The points of Undersalve spears struck hard and deep into the charging horses unprotected chests, momentum carrying the weapons in.  Fearsome neighs as mortally injured animals tripped and toppled thrashing friend and foe alike in the broken line of Undersalve spearmen.  Some riders were trapped beneath their flailing mounts, or cast off into untidy broken piles by the ferocity of their fall. But as many again of the nomad riders leapt nimbly from their felled animals.  Their scimitars flashed at the scattered militia, even as the foot soldiers tried to drag their spears free of the writhing horses.

“Draw your swords,” Matteus cried.  “Cut the bastards down.  Think what the scum want to do to your wives.”

His own sabre swung lightly in his hand, the old familiar rhythm, hack, slash, thrust.  A heavily jewelled nomad charged at him, twin swords dazzling as they whirled high and low.  Matteus caught one blade on his shield, parried the other, thrust his knee into the nomad’s stomach so hard the man spewed out his last meal of liquid courage.  Matteus drove the pommel of his sword down on his opponent’s head.  He heard the crack of splitting skull and the nomad collapsed in his own vomit.

He whirled in annoyance, untroubled by this fresh opponent. A shield slam and a sharp eviscerating slice of his sabre and another nomad got to meet his intestines en route to meeting his maker.   She wasn’t supposed to be here, but there she was.  Her pale cloak was stained, splattered with gore a deeper red than her auburn hair.  Green eyes flashed as she swung her bloodied mace at a nomad who had unwisely taken her for a soft opponent.  She swayed beyond his sweeping scimitars and then leant in with a vicious side swipe that crushed his knee. As his buckling leg brought him toppling down, she swung the mace upwards crushing his jaw into his face.

Matteus fought his way to her side.

“By the Goddess this is warm work, father.” Her face was a mask of grim determination; killing was a necessary business not a personal triumph.

“Too warm to last long,” he agreed.  “I told you to stay back with the baggage.”

“I’m your daughter, not your baggage.” They turned back to back as a fresh pair of attackers burst through the melee.  “You promised my mother you would never leave me. I mean to hold you to that.”

“By the Goddess you are your mother’s child,” he exclaimed.  A third nomad ended on the point of Matteus’s blade.  He turned to his daughter’s aid but her enemy was already stretching his length on the ground, the side of his head hollowed by the imprint of a mace.

It was quieter now.  There were fewer enemies, no battle shouts, just the braying of wounded horses and the groans and rattles of dying men.  Matteus surveyed his line such as it was. A ragged zig-zagging gaggle of survivors and survival made them victors.

“No Niarmit, not yet. All we have done is not lost yet.”

He strode towards the front of their line.  A few horsemen were galloping away in a broken retreat across the broad plain of Bledrag Field to the low rise at its western edge.  There was still the clash of steel and the clamour of battle away to their right, where the elves of Hershwood were holding their position against three or four times their number of nomads.

“By the Goddess, the Lord Feyril fights well!” Matteus declared as plumes of lilac fire erupted in the midst of the enemy.  “Gather yourselves, men,” he called.  “We go to the aid of Hershwood, just as he came to our aid.”

They tried, it was true.  They rallied and stirred themselves into some semblance of order, but his poor soldiers were spent.  Matteus walked amongst them, clapping a meaty hand on backs covered in the grime and dust of battle.  “Come on.  Come on.”

He stopped.  On the ground amongst the dead lay a thin militiaman and by his side a houseguard.  Matteus slipped to his knees.  “How goes it Hod Hargan?” he asked.  The boy was deathly pale, a broad deep cut across his chest leaking blood so slowly only because he had so little left to lose.

“You are hurt,” Niarmit was kneeling in the dirt on the other side of the fallen soldier.  “Here, take my hand, feel the Goddess’s grace.”  She fumbled around her neck, pulling out the golden crescent symbol of the Goddess.

“Sanaret servum tuum carus dea,” Niarmit intoned the prayer of healing.  When it wrought no response she made to start again, but Matteus put his hand over hers.

“He’s gone, Niarmit,” he said softly. “The Goddess has him in her care now.”

She looked at him across the dead militiaman.  The fierce determination that had carried her through the battle cracked.  Her lip trembled and in that moment she was his daughter, his little girl, seeing sights too dreadful for one who had lived but eighteen summers.  Not princess, not priestess, but a young woman in the midst of blood and death,

“This is awful father.”

“Victory is awful, Niarmit.  The only thing worse is defeat.”

“If Rugan had come, if he had brought the force of Medyrsalve our losses would not have been so bad.  Why didn’t the bastard come?”  Her eyes were wet as she shivered with rage or grief, he couldn’t tell which.

“What’s not done, is not done, Niarmit.  We can have words with the half-breed Prince when this day is done, but there is a battle still to be won here.”

He straightened up, old joints creaking to serve notice that adrenaline could only borrow present vigour from future discomfort.  “Come, form up.  Feyril holds his own and now we may take his opponents in the flank and rear and drive these scum from our land.”

There was a ragged cheer as his much diminished troops formed into a battered but triumphant line.  But the cheer tailed off into a groan and then cries of alarm.  Matteus swung back from his survey of the distant enemy, abandoning his search for their weaknesses as his soldiers shouts told of peril near at hand.

Matteus had fought many battles in long years of service to the Salved, but now he felt the leaden despair in the pit of his stomach at the end of all hope.  They were running and howling, great wolves loping across the field of Bledrag, ugly green skinned creatures on their backs.

“What’re orcs doing in the desert?”

“They’re not in the desert, they’re here, coming for us and there’s more.”

All across the Beldrag field, five? ten times his numbers.  Faster than horses, hardier than nomads, fresh and numerous opponents.  And behind that tall lumbering shapes, ogres of the mountains. It didn’t matter how they came to be there, answering that question wouldn’t save them.  Nothing would save them.

“Form up, eyes front, spears ready,” Matteus commanded with uncracked authority.  The militia and the guardsmen complied with unthinking obedience, there was no point in thinking, just to do and to die.

“What do we do father?” Niarmit said at his shoulder.

He looked at her, his daughter, mouth set, faith firm. Either her father or the Goddess would guide her and she trusted them both.  She trusted them with her life.

“You are my daughter, Niarmit, and I love you,” he said with a sudden regret that he had not said it often enough or hard enough in the eighteen motherless years of her life.

She looked at him oddly, as though unaware of what tide of destruction was about to overwhelm them.  He wrenched at the ring on his finger, cursing at his gnarled and swollen knuckles, ripping skin as he pulled it free.

“Put it on!” It was his barrack room voice, the one he never used with her, the one when something was to be done now, no questions.  Yet still she hesitated.  “Niarmit!”

At last she slipped it over her finger, looking at him with unaccustomed suspicion.  He held her hands made her cover the ring on her right hand with her left and looked into her eyes.  “Now say effugere.”

“Effugere, say it, hold the ring and say it.”

“Niarmit,” he was angry now, cursing that her mother’s stubborn streak should surface in her daughter at this time in this place.  “Just say it. If you love me, say it.”

Eyes hooded with doubt she gazed at him and slowly softly mouthed “effugere.”

It wasn’t as he had expected, she didn’t suddenly disappear.  She faded over a second or two, long enough for him to see the surprise register in her face.  He could imagine her puzzlement as her surroundings changed from the carnage of Bledrag field to the safe security of the temple at Woldtag.  And then she was gone, entirely gone, entirely safe.

He turned to the thin battle line, short and thin.  Men who would not run, who could not run were resolved to die where they stood for whatever cost they could wreak from the howling new enemy.

He looked down at pale militiaman’s still body.  “I will see you in the arms of the Goddess, Hod Hargan!” he said.

The Battle of Bledrag Field is a prequel to the events of T.O. Munro’s Bloodline Trilogy. The first two books in the Trilogy are available through Tom’s Author page here