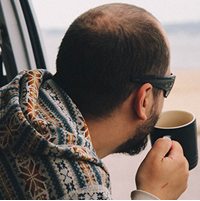 Hi, I’m James Calbraith, I’m a London-based Japanophile and a British history buff, interests I’ve been combining in my novels published since 2012 – the Year of the Dragon series.

This year I’ve released the final two novels in the Year of the Dragon saga – book 7, the Shattering Waves, and book 8, the Last Dragon King – as well as a small tome of haiku about Japanese sweets, which turned out surprisingly popular J

I’ve learned how to write longer, more meaty novels: the Last Dragon King is almost twice the length of my previous books, with a lot more plot and character development happening on the pages than usual. It’s something I’m going to carry forward to my next series of books, which I’m starting to work on next year.

It’s gotten a lot harder to break out. The marketplace is now saturated, the Amazon algorithms tightened, the good marketing opportunities are few and far between – though there are many places where you can advertise, very few (like SPS) grant any decent results. It’s a much tougher world than when I was starting out – though it doesn’t mean you shouldn’t keep trying!

Viet Nguyen’s Sympathizer. It’s one of the best written books I’ve ever read, gripping from start to finish, and deeply profound, with a topical message about global conflict and treatment of refugees and immigrants.

What are you currently working on? What do you have planned for 2017?

I’ve started work on an entirely new series of books, the first of which I plan to publish before the end of next year. These ones will be historical fiction, rather than fantasy, and will be set in the British Dark Ages – 5th and 6th century AD, on the threshold between Roman Britain and Anglo-Saxon England. I haven’t been this excited about a project in years, hopefully this will be fun for the readers as well!

Follow me on my blog at jamescalbraith.com for publishing updates – and on Twitter @eadingas for random thoughts.