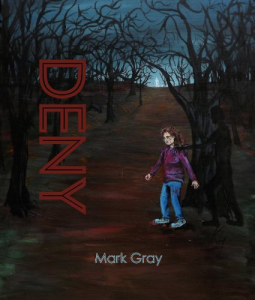 Cassie Moore just killed her only (sort of) friend.
And she liked it.

Deny is the story of a girl who has awakened a darkness inside of her and can’t escape the urges and cravings that insist she was born to be a monster.

And maybe she was.

But then again, there are other voices to consider and sometimes the biggest challenge in life is to figure out who or what to believe.

Cassie finds herself stuck between two worlds, but quickly becoming more and more immersed in the world of darkness and violence.

It’s what she’s drawn to. It’s where she feels most free, and who doesn’t want to be free?

Who determines what’s right or wrong anyways? Can we really be expected to fight against our own nature?

Deny, the debut novel from Mark Gray, is a gripping thriller that enters the mind of a young killer as she wrestles with her identity, uncovers life-altering family secrets and battles for control of her own destiny.