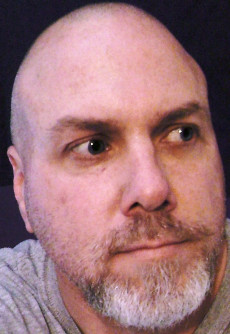 TM: Thanks for having me, Paul. Glad to be here.

A good place to start as any is the recent  release of Book 5 of The Demon Squad series ‘Beyond the Veil’ how has the reaction been and are you still enjoying writing them?

TM: Man, I was blown away by the response to Beyond the Veil. I sold over 600 copies the first full month it was out, which was amazing, and it’s still moving along nicely. There haven’t been a ton of reviews yet, but the feedback I’ve received and the dozen or so there are between amazon and Goodreads have been mostly positive.

And yeah, I’m definitely still having fun with the series. The deeper I get into it, the more there is to explore. So many side adventures are popping up and the world just keeps growing. From the looks of it, I’ve got a few more Demon Squad books in me, at least.

You took some time a few years ago to try your hand at Epic Fantasy. Is the slight ‘genre-hopping’ something that appeals to you and how do you react to general fan comments that disapprove of such moves from authors.

TM: My brain doesn’t operate in anything remotely resembling a linear manner. I can’t control the stories that pop into my head, so I don’t really bother. Once an idea has formed sufficiently for a story, be it horror, fantasy, sci-fi, whatever, I sit down and write it. I didn’t used to give much thought to what I was writing, just as long as I was writing.

These days, I’m a little more restrained. I’m seeing where my audience is and realizing my stepping out of their comfort zone impacts the business side of my writing. While I don’t want to become a one trick pony and only write urban fantasy, I’m starting to learn that I do need to take some small measure to adapt to the market. I won’t stop writing what I love, or putting it out, regardless the genre, but if I want to do this for a living, I have to focus my energies a little better than I have been.

As for criticism of my genre-hopping, I don’t care. I write because I love it. I tell the stories I tell because they’re screaming in my head to be told. If folks don’t like a particular story of mine, that’s unfortunate, but I stand behind each and every one.

You have recently returned from the World Horror Convention in New Orleans (in fact we’re lucky enough that you written a piece for the Showcase Blog for us), is this an annual pilgrimage and how much does it mean to you to be able to meet the fans and other authors.

TM: I’ve gone to the last three events, so I guess it’s kind of becoming a yearly thing for me. The event is usually limited with regards to readers, the majority of the convention geared toward publishing folks, but it’s a great experience. Getting to meet fellow authors and share stories and connect on a creative level is an amazing battery charger for a person’s creativity.

I credit much of my success to the relationships I’ve built through this event, and others. The networking aspect of conventions, and the sharing of knowledge, can never be overlooked in a writer’s career.

I’m shooting to make Lonestar Con in San Antonio this August. More of a fantasy-based convention, I’m hoping to meet a ton of the folks I interact with online and come away with it fired up.

TM: This last event was mostly social for me. I didn’t actually pitch or make any solid plans with anyone, but sometimes it takes months for all the effects to filter down after a convention. We’ll see if anything pops up.

TM: Zombies and cowboys? Who the hell would combine those two things? Oh yeah, Kenny Soward, JM Martin, and me, apparently.

While chatting with Joe one day, he brought up the idea of us working together on something. I thought it was a great idea, so I said yeah, why not? Joe’s an awesome talent. We got to working out the idea and came to find out that he and Kenny had wanted to do some Clint Eastwood meets zombies type of book together. So, thinking this was the perfect opportunity, that idea kind of got folded together and we dragged Kenny along kicking and screaming (well, not so much, but it makes for a better visual if I pretend he was difficult.)

In the end, we came up with an idea entitled Dead West, a serial novella that will mix our various writing and creative styles. There’ll be lots of action, great characters, and historical depth, all woven together in a tight, fast-paced package.

You are, in our opinion, a huge believer in self-publishing. What is it that makes this your preferred method, is it purely speed of delivery?

TM: I’m definitely a believer in self-publishing, but I don’t feel it’s the only path. Like many other authors these days, I believe a mix of publishing approaches is best for success. You have to diversify in order to keep moving forward.

For me, self-publishing is a kind of first step. I make decent money doing it, so it’s allowed me to better my presentation and marketability. And while I’ll continue to self-publish, my goal is to parlay my success into a traditional deal of some kind. I definitely want to do both.

As for exactly why I started to self-publish, it was mainly from a profound dissatisfaction with the approach of the small press I started with. I had outgrown them. My goals were bigger than theirs were with regards to my success. Also, the lack of control when it came to pricing and quality frustrated me.

While I’m able to release trade paperback copy of my books for less than ten bucks, making my paperbacks comparable in price to mass market books, my first publisher was charging nineteen to twenty dollars for comparable length works. That’s restrictive for a small author. Only the diehard fans were picking up my books, and most of those were at conventions because I was there to sign them. Self-publishing allowed me to be competitive.

Your covers are always very polished. How important a part of the package is this for anyone new to the scene?

TM: That wasn’t always the case. I had to learn the hard way that people really do judge a book by its cover. And while my original artist was awesome, she did this stuff on the side, on top of school, life, her job, etc. She showed me what could be done, so when she wasn’t able to work with me any longer because she was just too busy, I moved on looking for other talents who had her abilities but could bring a hefty dose of professionalism along as well.

For someone new on the scene, I’d definitely sit down and advocate professional editing and cover design. It’s hard on the pocket at first, sure, but it’s worth every penny when someone picks up your book and turns it over and over again, wide-eyed at the professionalism displayed.

That’s what separates many of the successes from the failures in self-publishing these days. The authors who just slap together a product aren’t going to do anywhere near as well as the ones who take their time and put the effort into the presentation.

(And for those interested, my current cover artists are Carter Reid of the Zombie Nation and JM Martin over at NineWorlds Media. Both are amazing at what they do.)

It’s now the part of the Showcase where we like to give you free rein. Choose your words carefully. Who can we look out for? Who’s work are you currently enjoying?

TM: This is a tough one because there are always so many fabulous authors being overlooked. Ed Erdelac is one I always try to champion. He’s a fantastic writer, with great depth. His Merkabah Rider series is a must if you like fantasy that’s original and powerful.

On that note, Thanks once again for taking the time to chat. Please be sure to tidy the cushions on your way out.

TM: Thank you. Had a great time, but I have to say, I won’t be cleaning up after myself. In fact, I stashed a half-eaten candy bar in between the seat cushions for the next guest. Hope it doesn’t melt.