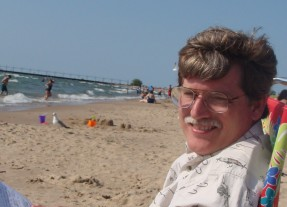 SPS: Tell us a little bit about yourself Marshall and where this love of History stems from.

MB: I grew up loving history, particularly WW II aviation.  My dad was trained to fly by WW 1 ace Weir Cook in Indianapolis in 1938, and flying was an enormous part of our family.  When he was finally drafted into the USAAF, he had 700 flying hours already completed.  He went on to become a flight instructor and flew fighter planes.  I think visiting Gettysburg as a kid brought military history to life, and I’ve enjoyed it ever since.  I read lots of WW I and WW II aviator autobiographies, but my interest in history covers all eras.  My wife says I’m a walking encyclopaedia.

SPS: The tale of Guiamo began as something you were writing for your ten year old son.  At which point did you feel the urge to make this something available to a much wider audience?

MB: When I reached the end of book one, I knew I had something special.  I kept working  simply for the joy of writing for a long time, thinking someday I might publish it.  I had one guy advise me to wait until I had all nine books written, but in the end, I knew this shouldn’t wait five more years.  After the fourth book was completed, I knew I had to pursue it.  Many disappointing book submittals later, I learned about Smashwords and CreateSpace for e-book publishing and print-on-demand and in a relatively short time, was off to the races.

SPS: You include many historical references in your work. With all the research involved, where there ever times you were tempted to make your work pure fiction?

MB: No.  Even in the earliest stages, it was to be a work of fiction, but always in a historic setting, and I wanted it to be as realistic as possible.  But I also wanted to incorporate legitimate legends into it as if they were true.  This brings into the story dragons and other creatures which gives extra flavor to the actual history parts.   I have read many of the works of historic writers; Pliny the Younger, Diodorus Siculus, Dionysius of Halicarnassus, the Geography of Strabo come to mind.  As I read these, whenever anything of interest came up, I made a note of it.  This has all been put into Word documents for reference, and I have used this to add some key historical points in the Guiamo story.    I also like to add quotations from these writings to the beginnings of each year/chapter to show the reader what the Romans and Greeks actually thought of certain topics, particularly their views about the ancient gods which is quite different from what we see in movies like Percy Jackson.

I think one of the most astonishing coincidences in writing this story was that I was studying a modern map of England, looking for a big lake for a particular episode that was close enough to fit the storyline.  There were no lakes around on the regional map that were anywhere large enough, and I was stumped.  Now that part of the story pertains to a stone that was discovered that is red and white and looks like a big eyeball, and is involved with activities at a big lake.  I looked to the regional map next to it, and just to the north of the first map, there I found an enormous lake, Lough Derg, which means “loch of the Red Eye.”  An astonishingly perfect fit and ideal location.

SPS: How much of a help are the Timetables, Calendars and Genealogies when it comes time to sit down and start writing?

MB:  It’s easy to lose track of time in writing this story, and I was forced to put a calendar together so that it doesn’t snow in July, or have two years worth of activities in six months.  Things like that.  Each chapter in these books is one full year.   I also try to take note of nature at different times of the year, so the raspberries can be picked in the right season, crops are planted at the right time, harvest etc.  The tough part is not so much the calendar, but the travel time it takes to go from village A, cross river B, and on to hilltop fort C.  Sometimes we’re measuring the travel distance of desperate men in haste on foot vs. horseback at a cantor, or by sea, or a supply column with wagons.  All this has to be estimated as reasonably as possible so the timeline flows as realistically as possible.  What’s fun for me is that by forcing the timeline to occur in this fashion, certain scenarios can develop where character A arrives at a destination two days before character B, so A might have time to perform some task or have a conversation that I wouldn’t otherwise have been able to do.

Genealogies are important and difficult.  At this time in history, the information of the local kings is scant at best with many petty kings being known only by partial name as found on coins recovered from excavated sites.  But there is some information available, and I try to get this right.

SPS: After the release of the 4th instalment in the Guiamo Chronicles ‘Inis Emain Ablach’ how pleased are you with the reception for the books and how much more of the tale is yet to be told? 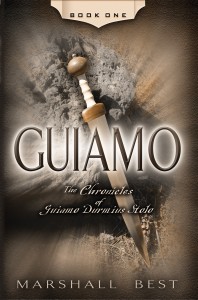 MB: I’m delighted with the reception of the first book “Guiamo”  All 4 or 5 stars out of 5, mostly 5, but all extremely favourable.  That really was a treat for me, to know that I actually wrote a great book.  The first review on book 2 came back that, to the reviewer’s pleasant surprise, book 2 was actually better than book 1.  My own son, William, agreed, saying he thought all four books were great, but that books 2-4 were the better than 1 by a high margin.  Book 1 is the background story to the really big adventure that is Guiamo’s life.

The Guiamo Chronicles will span many, many years in the 9 books I have planned.  Book 5 is about 1/3 completed and begins 10 years after book 4 leaves off.  There will be gaps of time between the remaining books, and will continue through his death as a very old man.

MB: I suppose if there is demand for more Guiamo episodes, I could write some more concerning Guiamo’s “lost years” in between the other stories.

The Princess Meredith Bedtime Tales were written just as that, bedtime tales for my then 6 year old daughter, Meredith.  I then began the Guiamo Chronicles for my then 10 year old son, William.  Before I got to far along with Guiamo, I began another story, a fantasy story, for my daughter, Cecily about a girl her age set in the 1920’s in Tennessee.  I’ve written the first chapter that gets things rolling, but stopped at that point to focus on Guiamo.  I also have a plan to write another story, a single book, that’s a sci-fi for another son, Elliot.  It takes a good year to write a Guiamo book, so it’ll be a little while before Cecily and Elliot’s stories are completed.

SPS: As much as we hear ‘Don’t judge a book by its cover’ a great many people still do. Your covers are, if you don’t mind us saying, very impressive. Was this something you put a lot of thought into? 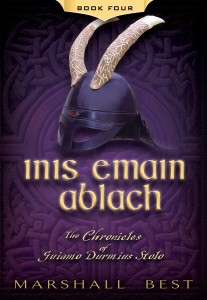 MB: I knew what I wanted for the cover in concept, a photo of an artefact pertinent to the story.  I took the photo of the sword resting on the stone in a photo shoot with William and gave it to Jim Pardew, a really talented graphics artist I know from church, and he did all the magic to make the cover really pop.  I wanted the title to be written in Roman carved letter style because he’s a Roman, but I switched the font in  Books 2-4 to the Irish half-uncial style that was fitting to that era in Britain where the remaining Guiamo stories are told.

Jim did the cover of the second book entirely including the ring photo.  I photographed the spear on book 3 and again, Jim did a great job turning a stainless steel spearhead on a broomstick to look like an ancient bronze spear.  Book four was the challenge.  I had to make this one.  I started with a purchased leather-and-rivets helmet, built  and stitched the lobster tail neck protector, built, painted and mounted the dragon horns and then Jim photoshopped it in many ways.  My son has the original helmet mounted in his bedroom.   It’s pretty cool.  The day after I completed the helmet, his school celebrated “hat day.”  He wanted to wear it to school, but after a quick moment, we realized that the other kids would knock it off his head and break the dragon horns.

SPS: Your wife, Tracey, is heavily involved in helping you to promote your work. How much does this help in giving you time to write?

MB: Enormously.  If the marketing was left to me, I’d drown in it and not succeed at either marketing or writing.  With her taking on this enormous task, I can relax and write.  She seems to really enjoy the work.

She was sick for about six months a year ago, and with all the other family duties taking care of her and our six children, I didn’t get any writing done.  Not just because of the work load, but also because of the stress load.  My writing has to be done when I’m relaxed and can be creative, so her marketing work really helps.

SPS: A couple of questions we always like to ask at this point. Firstly, why do you choose to self-publish?

MB: The world of book publishing has changed so much.  With e-books, there is a way for aspiring writers to get their work out there.  With the traditional publishing route, it is nigh impossible to get a publisher.  The percentage earned on e-books is so much higher too.  Now that we have print-on-demand, traditional business models for the book industry have to be thrown out the window.  The world is changing and, for the writer, for the better.

SPS: Secondly, is there anyone at this point you would like to recommend to our readers? Someone maybe whose work you have enjoyed recently that might not be a familiar name.

MB: My cousin wrote one entitled “The death and life of Sherlock Holmes” by Grace Best-Page.  It’s a pretty good read.  I think the way she has Sherlock behaving and speaking is a dead ringer for how Robert Downey Jr. played the role.

SPS: Thank you for taking the time to chat with us today Marshall, and good luck for the future.