Posted Jul 1 2013 by Paul in Interview with 0 Comments 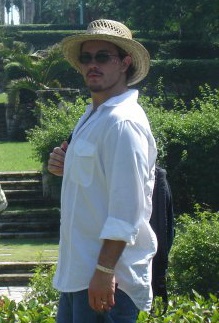 Jacob Parr, author of Moonlit Nights. Welcome to The Showcase. It’s a pleasure to have you with us.

Everybody starts somewhere, so can we get an insight into how you got into writing and when you first realised this was something you wanted to do?

JP: Writing for me is something that I have always done for as long as I can remember. Even when I was little I would craft all sorts of stories since I first learned to write. The first book I had published was actually a story I came up with over ten years ago and with many tales I just kept them locked up in my own mind or written down in various notebooks. It wasn’t until I read a quote from Albert Pike which said, “What we have done for ourselves alone dies with us; what we have done for others and the world remains and is immortal”, that I realized the stories I was crafting needed to be shared on a larger scale!

Your first novel ‘Moonlit Nights’ is a dark Thriller/Horror. Is this a genre you see yourself settling in, or do you have plans to write across a variety of genres?

JP: Thrillers are by far the most fascinating genre for me not only to read but to write as well. They are one of those categories that seem to be able to encompass a little bit of every genre. You can have the action and adventure throughout the course of a thriller and also have romance, mystery and intense moments that might make a chill run down your spine! I think ‘Horror’ gets a bad reputation by some people who don’t realize that’s what most thrillers are. Any book that makes you cringe in fear for a character really could be classified in this genre but so many authors seem to hesitant to admit it. As for settling in, I don’t think I will be limited to necessarily one genre over the course of my career; however I do enjoy creating an atmosphere of suspense in my stories.

A little birdie tells us your book trailer for Moonlit Nights was produced by your own company, Dark Moon Studios. Care to tell us a little bit more about the company and how it interacts with your writing?

JP: Sure! I created Dark Moon Studios once I had my first novel released because I was tired of seeing certain companies out there pretending to provide products at ‘reasonable prices’ for first-time writers just trying to break into the literary world, yet when you looked at what they were charging, there was no way they were ‘helping’ new authors with the inflated prices they were suckering people into paying. Some people forget to shop around and compare prices for certain services and may think what a company is charging is the standard just because they are well known or have been around for a while. I wanted to give authors various services that were more realistically priced whether they are just releasing their debut novel or are a national bestseller and believe I have done that with Dark Moon Studios.

How have you found the reaction to your debut novel, is it how you expected it?

JP: I have found the reaction to be great so far. People really seem to be enjoying it immensely! It has been getting reviews on all the major retail sites and continues to move up in the rankings every week. I love hearing from fans through various social media sites or e-mail and it has actually blown me away at how high it continues to go in sales rankings from places like Amazon and other sites as word of mouth spreads. It has certainly been a great learning experience too as I prepare for the release of the second edition of ‘Moonlit Nights’ to be released in the following months and my second novel as well.

What we can expect from your upcoming work ‘Tragedy’. More of the same or something a little different?

JP: ‘Tragedy’ will be a thriller that will be taking place in Baltimore, Maryland instead of Washington D.C. and the surrounding cities and will feature a whole new cast of characters for readers to fall in love with. This title will also not feature anything supernatural…the villain preying on the working class of Baltimore being flesh and blood. However, there will certainly be plenty of mystery and suspense to keep readers turning the pages till the end.

Being as you are present in the Self-Publishing Showcase lounge it’s only right to ask… What was it that made you decide upon the self-publishing route?

JP: Lots of research (haha)! I realized that both self-publishing and traditional publishing had pros and cons and really I just had to weigh them all and decide what a first-time author like me really thought would be the best route to bring my writing to the masses. What finally pushed me to choose self-publishing would have to be the freedom and control I have over my own work.

The shout-out spot. It’s at this point you can let us know of anyone else you would recommend to your fans? Who are you currently reading?

JP: I’d have to say that if you really want a great read then you need to pick up anything by the National bestselling writing team of Douglas Preston and Lincoln Child. Not only were their earlier books what drove me when I was younger to up my game when it came to crafting amazing stories, but Douglas Preston is also a great guy who has never seemed to mind answering the various questions regarding my own writing when I’ve needed it. The books they write together and their solo novels really are some of the best fiction out today! I’m actually awaiting the release of their latest novel ‘White Fire’ due out in November.

Finally, we’d just like to Thank you for taking the time to talk to us today and for joining us on our journey. Until we meet again…

JP: Thanks for having me! Now I have to get back to work on ‘Tragedy’ to hopefully have it out for the public by the end of 2013…