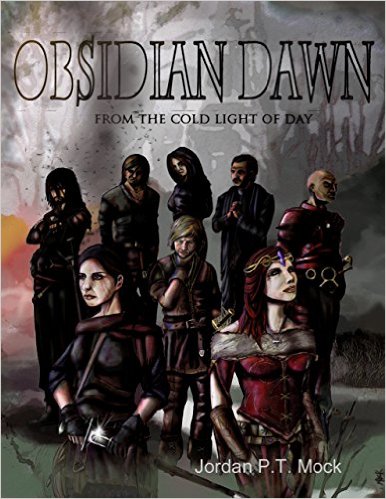 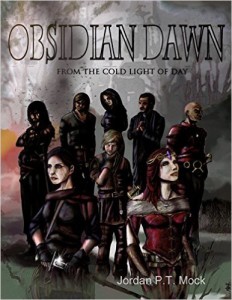 Obsidian Dawn: From the Cold Light of Day is a high fantasy about a young woman struggling to take revenge and claim a kingdom. In order for Aria to see her dreams fulfilled, she must shed her old self and claw back inch by bloody inch everything she has lost.

In the last ten years, the Kindred Kingdoms has been licking its wounds since the bloody civil war. The Binding Rebellion was crushed and an uneasy peace settled over the three-island nation under the leadership of Cadarn Dmitry Romanenko, who took his throne through manipulation and brutal betrayal. However, the crown doesn’t protect him for long, and Romanenko soon becomes a victim of another’s political machinations through the use of dark magic. With her father dead, Aria Romanenko escapes the palace with a trusted few and flees to Karsh; an island renowned for its mercenaries. In pursuance of revenge against her father’s usurper, she enlists the aid of sell swords and cut-throats, but at what cost?

To be honest, the synopsis above, taken from the book cover, only just sets the scene for the start of the book itself as the story is about Aria’s quest to get her heritage back. Definitely more Game of Thrones than Lord of the Rings, with its notable, but not objectionable for me, levels of sex, violence and swearing, this is a fantasy novel that really captured my imagination. I could almost see the characters and locations as they appeared on the page and the action unfolded around me like I was there, hearing the noises and even, sometimes, smelling the smells in The Den, which sounds like a wonderfully lowlife inn and the ideal location for Aria, the Cadarna (like a princess) of the Kindred Kingdoms, to raise her army of ruffians and ne’er-do-wells and take back her birthright.

And there was a good lot of action too as the pace of the book was never slow while still managing to be engagingly character driven, none more so than the Grey Lord himself, Lavolpa, who had a real pirate-king loveable rogue arrogance about him. The writing itself was very readable, with no difficult names, as is often the case in fantasy novels, and a good humour in some of the thoughts and dialogue of the characters, like “To be fair, Lavolpa could have a band of smiling orphans dancing happily around him while clutching in his hands a kitten he’d rescued from a tree and still look a shady bastard.“ It was also refreshing that, as a fantasy novel, it didn’t use complex language for the sake of it, making it feel overbearingly pretentious, as a lot of them seem to.

Another touch that I particularly enjoyed were the historical quotes at the start of each chapter; historical to the book that is, as the characters being quoted are fictional, but it gave the book a good grounding and sense of place in a long history rather than being in a disconnected bubble. I really got the feeling there were other stories to tell in this rich universe and, seeing that this is volume one, I hope that this is proven true as, between the dragon (which you will have to discover for yourselves) and the epilogue adding such a twist to the story that I need to know what happens next.