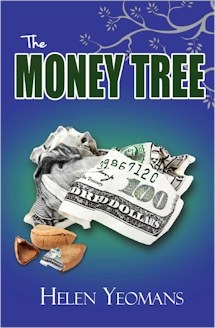 It’s a dictum that has been passed down through the ages, often in moments of exasperation, from parent to child, that money doesn’t grow on trees: except that one family, the Frisbys, know that it can, and does.

George Frisby, a horticulturalist, has been cultivating Juniperus Lucre for years, harvesting the nuts of the tree and cracking them open to find freshly grown US dollar bills. His family are all involved, from dulcet-toned wife Jane who soothes the trees with her voice, to his bright, but rebellious daughter Daffy, and his entrepreneurial son Mike.

They are careful with their money, only spending what they need to, and generously giving a donation to charity every year. Unfortunately, there’s a problem with their greenbacks: dogs can’t resist the smell and will eat it at every opportunity. As the government authorities begin to realise what trouble might lay ahead if word gets out about the trees, teenager Daffy begins to think that is exactly what is needed, to free finance from the shackles of government control. In the meantime, her younger brother, Mike, is intent on carving up the world into franchises, encouraging others to grow the trees – for a small fee.

The Money Tree serves to deliver a lesson, not just on the impact and consequences of fiscal control, whether it be through governments or individuals, but also on relationships within the family and with their neighbours. The bonds between each member of the Frisby family are tested, stretched taut, and then brought together more strongly than ever, as they find themselves under attack by the governments of the world. Neighbours discover that their life savings could be all but wiped out as the Money Tree becomes common knowledge, yet realise that this is just one of many factors which influence their financial prosperity.

Helen Yeomans has written a story that is beautifully balanced, picking up the delicate nuances of domestic interaction, whilst weaving a narrative that stretches from Canada to South America, England and Germany. Friends, family, government officials: all have lives that are inextricably woven together by the Money Tree. You will find yourself beguiled by the interactions between the characters, but left at the end wanting to dig deeper into the economics of money and barter systems. At a time when Bitcoin has started to become accepted as a de facto currency; where currency used to purchase in-game accessories is freely used; and in a global economy that has been depressed through the avarice of the few, this is a telling tale.