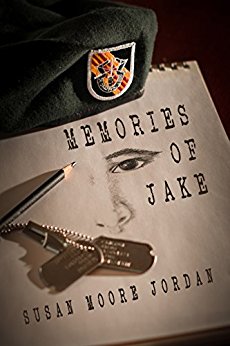 Memories of Jake, from Susan Moore Jordan, is the story of two brothers. A family tragedy in their youth brings them incredibly close, and the novel follows them through to adolescence where both brothers are drafted for the Vietnam war. Andrew, the older brother, returns apparently unscathed – though his dreams might suggest otherwise – Jake, though, suffers a severe head injury and loses his memory.

Andrew struggles to deal with the new Jake. He pushes his brother to remember, so they can feel that bond again, but little can be done to bring his brother’s memories back. Jake keen to discover himself, and hopefully trigger some old memories, leaves his family and sets off to visit their old town and surrounding areas. While away, a body is discovered in a burned-out cabin near to Jake’s location and Jake goes missing.

‘Watching Mary’s face reflect her response to the sweeping phrases of the “Fantaisie Impromptu” inspired him,’ and ‘Jake’s eyes were shining as the other soloists joined, and the chorus and the soloists sang intricate, beautiful patterns,’ being two such examples of the way Jordan entwines art with emotion. 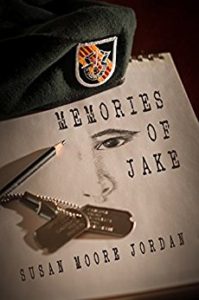 This novel, though, also covers the effects of war – Vietnam, in this case – and successfully tackles PTSD and the flashback dreams that Andrew experiences are very well written. You can see his character change as he struggles to deal with what he’s experienced. I would have preferred the war period to have been covered at the time, rather than just through flashbacks, but it doesn’t detract from the story at all.

For fans of Jordan, they’ll also be pleased to know that the book is linked in with previous works, in particular, How I Grew Up, book one in Jordan’s Carousel Trilogy.

The story overall is very easy to read. It takes you on a journey from tragedy to growth, back to hardship and beyond. The brothers pull you in – their bond is strong, and the challenges they face together and apart ensure it stays a gripping tale.

A beautiful book again; Jordan is fast becoming one of my favorites when I’m looking for an interesting yet relaxing read.