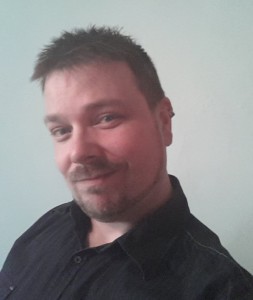 Hi, I’m James and I write stories. Sometimes they make people chuckle, at least I hope they do. I’ve had a few incarnations: Circus trained juggler, partially successful singer in a rock band. I like to think that author is my final form, though. It’s way more exciting and rewarding than anything I’ve ever done before.

After The Forty First Wink, I penned a number of short stories, some of which found their way into anthologies (Bad Little Boys Go To Hell, Santa Claus Wants You Dead), and some that will be seeing the light of day in 2017. The former is about a group of boys who build a treehouse and provoke an unwelcome siege from a band of little demons (Think Stand By Me meets Hellraiser). The latter tells of an administrative mixup in Lapland which leads to Santa seeking out the supposed naughtiest child in the world to visit some festive justice upon him. Bad Little Boys did particularly well, featuring in Dark Chapter Press’ Kids anthology, which is an Amazon Anthology Bestseller. Santa Claus Wants You Dead features in Fireside Press’ Weird Wishes anthology, and is one of the stories I had the most fun writing.

Look out for Buddy, due out in 2017, in Dark Chapter Press’ Kids Vol 2 anthology, about the grim reaper’s sentient teddy bear who gets lost on Earth.

As a writer, you always wish for bigger. More ticker tape, balloons and explosions. Since Wink was my first excursion into the writing world though, I think it was more important to establish a foundation. Other than that, my friends at Ragnarok Publications have the whole book release thing pretty well figured out.

As the Wink series has progressed, I have found myself abandoning my ‘pantser’ ways, in favour of planning out chapters, events and stages of each story. The first Wink novel happened organically, maybe because I was just feeling my way into the writing world, or maybe I just had a fully formed story in my head (let’s go with the latter). With new adventures taking shape in a world I’ve already created, the pressure is on to remain consistent, and refer back to earlier escapades. That means pants out the window, much to my neighbours’ horror.

I do feel that this is an evolution in the writing process. That said, you don’t just change how you write, because the spontaneity is still there, and I still edit as I go. It makes for a smoother transition, and less red pen from the frenzied editor when the final manuscript is submitted. That’s something I’ve always done – Structured pantsing, or pants with scaffolding, if you like.

The wonderful comments made in reviews for Bad Little Boys Go To Hell in Dark Chapter Press’ Kids anthology, which led it to become an Amazon Anthology Bestseller. At least now I can say that I contributed to a bestseller, while I wait for that elusive bestseller penned solely by me to drop, right?

That, and the continued praise The Forty First Wink gets. As my first novel, it will always hold a special place in my heart, so when people enjoy it, it carries an added weight of satisfaction for me. Like a sledgehammer of joy, right to the feels. The best possible kind of ouch.

I heard that a fan named their cat ‘Timbers’. As a cat lover, this was a double whammy for me. Timbers is the driving force of the Wink series, and I love that somewhere out there, there’s a cheeky rapscallion feline, possibly not with only one eye, who answers to the name of the captain of The Flying Fathom.

Reviews that start with “Wizard of Oz meets Terry Pratchett” and “Monty Python on an acid trip” make me very happy. Also, any time I see the word ‘hilarious’, I get the warm fuzzies, because that’s what I set out to achieve.

The stuff I write is weird, it’s bizarre. Some have even said that it creeps close to the ‘Bizarro’ genre. If I can make people smile with what I write, I consider that to be time well spent, because that’s what it’s all about, for me anyway. If I smile while I’m writing, I’ve done myself justice. If my readers smile when they read it, I’ve done them justice. If someone chuckles, hey, it’s bonus points and a cookie.

Re-use of words. My editor would probably strangle me if the small matter of the Atlantic Ocean wasn’t separating us. I’ve definitely learned that it’s prudent to go over what you have written and prune those terms that crop up like weeds. Oddly, they seem invisible while you’re writing, probably because it’s coming directly from your brain. In hindsight, though, it gives the editor a headache!

Research. Google is your friend. If you’ve written a dystopian fantasy novel, look in the right places for takers. If you’re story is all romantic and lovey dovey, maybe don’t send it to a horror publisher. If you’ve somehow come up with a tale of starcrossed midget robot ninjas on a doomed planet under attack from giant chickens, there’s probably a market for that. You just need to refine your research. Blanket bombing publishers might be an effective approach, but ultimately, it’ll just get you more rejections, which nobody wants.

Is it weird that I really want to read a story about midget robot ninjas on a doomed planet under attack from giant chickens now?

Although not technically from this year, I really enjoyed J.L Murray’s self published Jenny Undead. I mention it because I know that the sequel came out recently, and that she has more hot on their heels.

With The Fathom Flies Again, book two of The Forty First Wink series imminently arriving, I’ve been hard at work on the as yet untitled third book. It’s proving to be extremely challenging, since I am now tasked with pulling in all the strings, and tying up all the loose ends. Challenging, but immensely satisfying. To be given the opportunity not only to have a novel published, but to pen an entire trilogy is something that I never dreamed would be possible. For that reason, I am tackling it with resolve, wine and a serious amount of chin stroking.

I plan on writing as though the world is coming to an end. And also about the world coming to an end, which is convenient. After Wink 3 is finished, I have an entirely new project lined up, for which I have already sketched out the basics. Without giving away too many spoilers, it is a collision of both utopian and dystopian futures. I have a title in mind, although I’m keeping that secret until I start work on it properly. Like I said, spoiler free.

Either on the Ragnarok Publications site, or at The Forty First Wink Trilogy Facebook page. Of course, if anyone wants to teach me how to magic up a dedicated website, I can only pay you in whimsical stories.