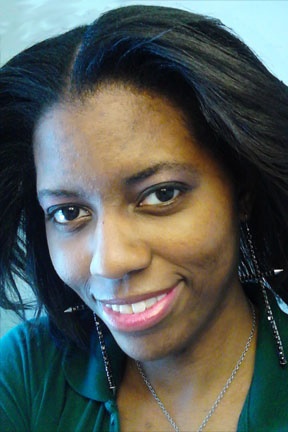 Self-Publisher’s Showcase: Today we are joined by Nicole Woolaston, author of Our Lady of Righteous Rage. Welcome to the Showcase Lounge, Nicole.

Nicole E. Woolaston: Thank you. It’s nice to be part of Self Publishers Showcase.

NEW: Well, I’m a writer and an artist. I started writing books for myself when I was in first grade, and I’ve been writing ever since.  I’m also into music and Japanese anime.

NEW: My perfect writing conditions are actually imperfect, because I get ideas at the strangest moments.  I can be sitting in front of my computer, or I can be sitting in my car at a red light.  That’s why I always carry a notepad with me.  I’m constantly making notes in a pad or on my phone.  I write all of the time.

NEW: I would have to say, Fifth grade.  My teacher, Mr. Hall, learned I wrote books for myself, and when the Young Authors conference became available, he sent me to represent our school.  Being in a room with other children who enjoyed writing as much as I did, along with being in the company of real published authors, made me want to write even more.

NEW: I think what separates me from other authors is my creativity.  I want to give readers the kinds of stories they’ve never read before. 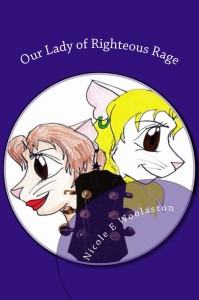 SPS: Can you take a moment to tell us all about Our Lady of Righteous Rage?

NEW: Our Lady is basically a coming-of-age story, set to music, in  1990’s/2000’s New York.  The story is told through the different points of view of the characters in the story, however, Amy, the main character, does most of the narrating.  Most of the events are centered around her, as she and her friends try to start both a band and  a business.  Along the way, they grow up, and face different challenges, such as divorce, heart-break, etc.

SPS: What led you to make your novel one of where the protagonist is a cat-girl?

NEW: This is a story I began writing a few years ago, using characters I had developed over fifteen years ago.  But, the characters were cat-people.  I thought about making them human for the sake of the story, but then I wanted the story and the characters to stand out from other stories in this genre.  I decided to take a chance, and do something different. I left my characters in their original form.  Keeping Amy as a cat-girl lets the reader look at the story more metaphorically.  Sort of the way the film “An American Tail” is a metaphor for an immigrant family coming to America.

SPS: Have you included any of your personal experiences in creating the novel?

NEW: Oh yes, several.  Many of the events in Amy’s life run parallel with my own.  The shows she attends at Jones Beach, seeing Green Day at Madison Square Garden, her celebrity encounter, are all real events from my life.  There’s also her love of punk rock and learning to play the guitar.  Even some of the guitars in the story, are named after my guitars.

SPS: Why did you choose to make music such a major factor in the story?

NEW: Music is such an important part of my life.  I have drawn so much inspiration from the band Green Day.  Part of the story involves Amy and her friends starting a band.  So, I wanted to incorporate my love of music, especially punk rock.  Punk rock is what brings Amy and her friends together in the first place. I feel music is something many people can relate to, because it can invoke so many memories.  Everyone has a favorite song, and when they hear it, they can remember where they were when they first heard it, or it will remind them of a special time in their life.

SPS: Who else can a reader expect to meet on Amy’s journey?

NEW: Readers are going to meet a host of characters.  There’s Vanessa, the dreamer; she wants her friends to start a business together.  David, one of Amy’s friends and someone who may be trying to hold her back.  Dee, her feisty best friend.  And there’s many more.  I hope everyone who reads Our Lady can find at least one character to call their favorite or relate to.

SPS: Are you looking first and foremost to entertain, or do you feel the book carries an important message?

NEW: A little of both.  I want people to enjoy the story, but I also want to deliver a message: to be yourself.  To own who you are, and never let anyone change you.

SPS: Do you plan to cover Amy’s journey again at any point, or has her story been told in full?

NEW: Oh, there’s still much more to the story!  I’m currently working on a sequel, “Your Fame Will Destroy You”.

NEW: I greatly appreciate what one of my readers, Ebunny, said on Goodreads.com. 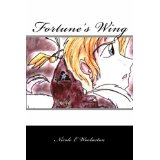 SPS: Can you take a moment to tell us all about your Fortune’s Wing series?

NEW: Sure. Fortune’s Wing is the story of a young man named Fortune Oyama, who learns he is part of a prophecy to either save or destroy the world.

SPS: What was behind your decision to switch genres and produce a Fantasy series, and how easy did you find the transition?

NEW: This was actually my  first series, and I think what made it easier is the fact that I didn’t approach it as a “Fantasy Series”.  I wrote the original manuscript for Book One in 2002, and it was the first series I’d ever written using human characters.  At the time, it felt more like a drama than a fantasy.  When I developed more details for the plot and added sorcerers and monsters, it became a fantasy.

SPS: What can you tell us about your protagonist Fortune, and how does his personal journey change him?

NEW: When Fortune’s journey begins, he’s a child, and as he faces new dangers and challenges, he becomes a man.  At first he’s afraid, and uncertain, but his love for his family and friends drives him forward, despite his fears.

SPS: You also have 3 books in your Valentine series. Tell us about the general theme of the series?

NEW: The primary theme of Valentine is female empowerment, or “girl power”, as some would say.  I wanted to create a strong female character, and surround her with other strong females.  The world of Valentine is filled with strong women, and each of them has her own personal struggles and stories.

SPS: Can you give us an idea of the readers you are aiming at with the series. Fans of…?

NEW: Fans of action or drama, or women’s literature.  The lead character, Val Entienne, is a bit of a Goth/Emo chick, so fans of that genre would enjoy it as well.

NEW: I’m working on the third and final installment of the Fortune’s Wing series, I continuing the Valentine series, and writing a sequel to Our Lady.   Plus, I’m working on illustrations for my first graphic novel.

NEW: Not at first.  I tried to go the traditional route, but that required sending out dozens and dozens of query letters to agents and receiving a lot of rejection.

NEW: I must say, it has become much better.  Six years ago, when I published my first book, I used a “print-on-demand” company called Xlibris.  Their services were overpriced and their marketing strategies left much to be desired.  It was very discouraging.  Then I tried Amazon’s service, Create Space, and the results have been so much better. I feel like I have more control of my material.

NEW: Believe in what you are creating, and never give up on yourself.

NEW: I have to recommend “Casting Shadows Everywhere”, by L.T. Vargus.  Vargus has a style like Vonnegut and Palahniuk.

SPS: Thank you for joining us today, Nicole, and all the best for the future.

SPS: For more information on Nicole Woolaston and her work, please do visit her Showcase Author page here.