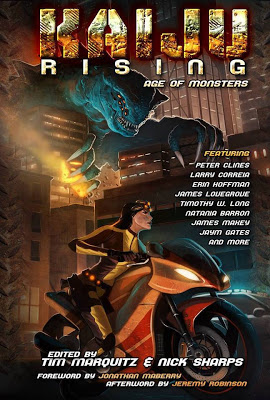 We thought with 7 days until the close, it was about time we dropped in again on the First funding project to receive our support. The project is for a Monster-themed anthology and goes by the name of KAIJU RISING.

The great news is the figures are very positive indeed – In fact the project is now 136% Funded! Since passing the initial $10’000 goal the authors involved have risen from 19 to 22 with the addition of Stretch goal authors Kane Gilmour, Howard Andrew Jones and Peter Stenson.

But there is more to come. Only a further $396 will secure New York Times bestselling author JAMES SWALLOW, who would be the fourth and final stretch goal author. Swallow has a long, successful history writing tie-in fiction for some very popular properties—including Doctor Who, Star Trek, Stargate, 2000 AD, and Warhammer 40,000. 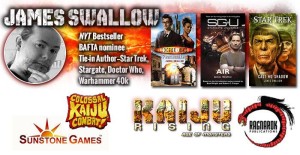 Acquiring James for a Kaiju Rising: Age of Monsters bonus story is a pretty sweet deal, but better yet is the announcement of just what he’ll be writing. Ragnarok Publications has teamed up with Sunstone Games for an officially-sanctioned COLOSSAL KAIJU COMBAT tie-in story! James Swallow will be penning this story, featuring fan-favorite Colossal Kaiju Combat monsters.

So, if you’re interested but haven’t yet gotten involved, you have 7 days left to do so. You can pledge in fact RIGHT HERE

Thanks again for your support.