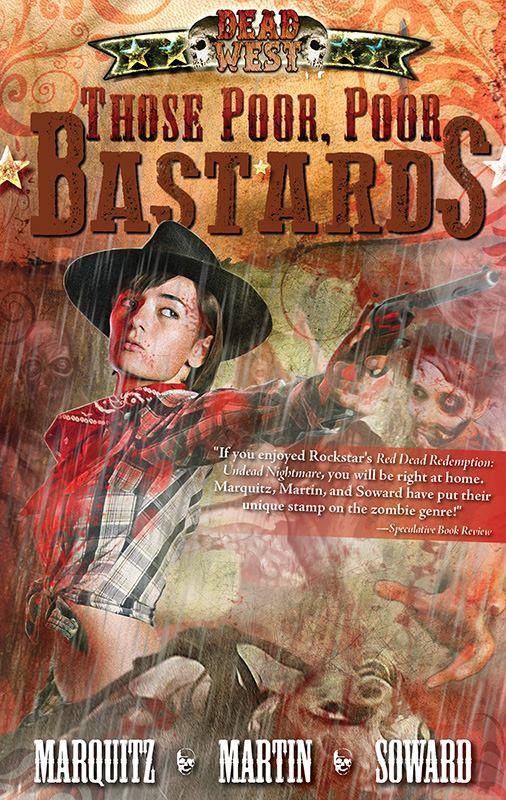 It isn’t often that we can say a new release is out co-written by 2 authors featured here on the Showcase, so to bring to your attention one co-written by 3 – yes, THREE – makes us very proud!

Wonderfully described as “THE WALKING DEAD AND HELL ON WHEELS COLLIDE!” this is one to pick up without delay. With further instalments imminent, isn’t it about time you headed DEAD WEST? 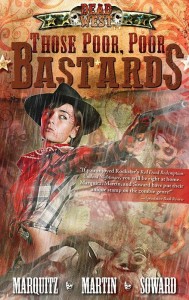 September, 1868…SOMEWHERE IN THE SIERRA NEVADA, during the expansion of the Central Pacific Railroad, Nina Weaver and her pa, Lincoln, trundle into Coburn Station with a wagonful of goods they’re looking to barter. Of all the rotten luck, their world—and the future of the American West—is forever changed when a sudden swarm of zombies invades town on the hunt for some human-sized vittles.

THOSE POOR, POOR BASTARDS is the first volume in the all-new Old Western Action-Horror series, “Dead West.” From the deranged minds of Tim Marquitz, J.M. Martin, and Kenny Soward.

What folks are saying…

“Those Poor, Poor Bastards (the authors, as well as the book) prove that zombies and the West were made for each other, and that the undead fiends still have plenty of guts and action to offer.”
—Lincoln Crisler, author of WILD

“If there is a typical zombie fan, then I am probably not it. In fact, this was my first time reading about ‘deaduns’ and now I’m hooked! The story flowed with ease, the characters were vivid and most parts likeable, even the not-so-pleasant characters gain your respect and empathy towards the end. I loved the fact that it’s set in the Wild West rather than modern times or some apocalyptic future. I would recommend Dead West to my friends, and am looking forward to book two!”
—Sarah Fernandes, Bloody Cake News

“A rip-snortin’, ace-high addition to the walking buzzard-food genre. Marquitz, Martin, and Soward have a hit series on their hands!”
—Paul Martin, Self-Publisher’s Showcase