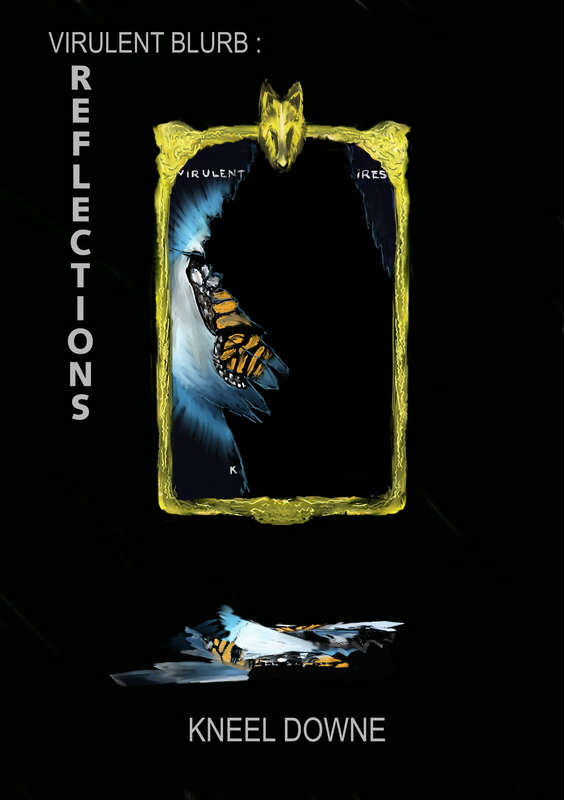 To me, reading this book was similar to a religious experience.

Such was this opus that it affected me like my first reading at Sunday School many years ago, but the references and comparisons are genuine in my view and not used to offend anyone or shock. It is always my intention when reviewing material to be open and honest and religion and spirituality weighed heavy in my mind reading VIRULENT BLURB:REFLECTIONS by Kneel Downe.

Kneel’s last book Amelia’s Song, whilst based in his Virulent Blurb Universe, was as removed from the style of Reflections as any book can be. Gone is the Shakespearian telling of Bowie lyrics, and back is the dystopian, gritty style from Kneel’s debut book VIRULENT BLURB:FRACTURES.

To start with, my religious feel to the book, is what I’m dubbing The Old Testament and the creation. We are introduced to child prodigy Joshua Knight, the founder of PolyPhaze Productions (The Jesus and birth of Christianity of the tale) and the inventor of Noonian Spheres, DreamCages and Dead Boxes. Joshua marries Dominika Rath, creator of ReGen and together they give metaphorical birth to splicing, where Human DNA and animal can mix to create new life.

If Terry Gilliam was given the 12Monkeys budget, Blade Runner’s set designers and told to film a ‘birth of religion’ story, this is the tale he would tell! The more you read about The Pyramid’s construction and the origin of the Copper Cascade facility, a favourite section of mine from Fractures, the more you see Kneel’s twisted, maniacal mind at work. As the technology improves, Joshua’s mental health starts to fail and something from another realm gets into the code. It’s almost a narration that comes from the mysterious mirror voice (my take on a God in this epic) but Kneel uses multiple voices to tell the story. As with using his icons or pop culture references in past stories, Kneel again includes the real world in the form of friends as characters, with Agent Zelen and Officer Cooper standing out. You also get to see more of the universe’s superheroes in the form of Dark Deliverance and Pluto Boy, but the biggest surprise is the introduction of a wolf spliced detective… and it’s not Lobo. Lyca, Lobo’s brother, is a private detective with no respect for the law and a contract with the powerful Pyramid. The Kane and Abel of the piece, Lobo and Lyca are astonishing characters and you can tell that Kneel loves writing them.

The end of the book sees you introduced to Pollyanna Knight, Joshua’s mother as well as a secret return to the land of Amelia.

This truly is an epic read. It is very spiritual and I dare anyone not to find a character they can emotionally bond with. A modern day bible story told by a cyber punk at the very top of his game.